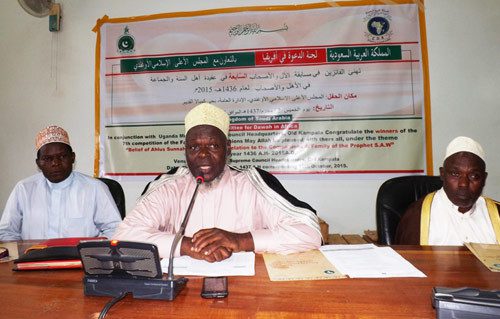 In a statement issued by Uganda Muslim Supreme Council (UMSC) spokesperson, Hajji Nsereko Mutumba, on Friday, Mubajje noted that the committee?s move in sponsoring Islamic quiz had inspired many Muslims to study and understand their religion.

According to the statement, Mubajje made the remarks on Thursday while presiding over a prize giving ceremony during which he handed over prizes to the quiz winners.

Congratulating the winners, most of who were students from different parts of Uganda, Mubajje urged them to put the prizes to proper use and to be good ambassadors of dawah in their respective schools and communities.

?Those of you who have won laptops and smart phones, don?t be tempted to divert from dawah,? he implored.

There were two slots for Hajj and the winners were Lumala Tagi Ssirri from Mukono and Bashir Abduswamad, a student at Emirates College Nkowe.

They successfully performed their Hajj recently.

The Mufti also commended the committee?s secretary general Dr. Muhammad Bin Hamad Al ? Huwaidi for his decision to support dawah in Africa and prayed to God to bless him.

The Uganda coordination Ccmmittee chairman Dr. Ziyad Swaleh Lubanga, who is also the UMSC secretary for Zakat said that over 2000 Muslims responded to the written quiz.

He added that after examinations, a short list of 273 participants was sent to the committee for dawah headquarters in Saudi Arabia capital, Riyadh from where the overall lucky winners were picked.

He thanked the Mufti for authorising the quiz in Uganda and for providing guidance to the coordination committee in Uganda.
Senior UMSC management officials and prominent Sheikhs from different parts of Uganda were present.

By Umaru Kashaka, The New Vision