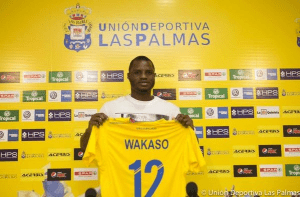 Ghana midfielder Mubarak Wakaso wants to excel at Las Palmas after joining the newly-promoted Spanish side on a season long-loan.

Wakaso, 24, joins from Russian side Rubin Kazan and has set his eyes on helping the side in their debut campaign.

?I come to help the club and the competition is important in this step of my future,? he said

? I am determined to do good things. I want to train hard as much as possible as the pre-season has been good for me. I play in any position on the field and this is a good moment in my career. ?

He added: ?I have come to UD because it is a big club in Spain. I came twice to play here and my former teammate Salomon Rondon in Russia said many positive things about Las Palmas and think it?s good for my future coming here, I?ve matured as player. I?m perfectly fine physically.?

The Ghana international is not new to Spanish football having played for Villarreal and Espanyol and relegated Elche.