Streetwise Promotions and Errol Hawks Sports Management has released the rates for the much awaited “Freedom Fight Night” fixed for Saturday, March 11, at the Bukom Boxing Arena, Accra. 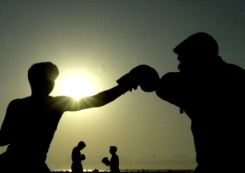 According to a statement from the organizers of the fight, the Popular Stand will go for GHC 20.00, with the Lower Stand and the Lower Media Stand going for GHC 50.00 and GHC70.00 respectively.

The statement said, the Ringside and VIP Ring Side will go for GHC 200 and GHC 300.00 respectively, whilst GHC 400.00 will be charged at the Platinum Lounge.

The statement said, advanced tickets can be purchased at the main gate of the Accra Sports Stadium, Bukom Boxing Arena and Bronx Gym, James Town.

Bantamweight prospect Duke “The Baby Faced Terminator” Micah, will clash with Jonathan “El Fenix” Aguilar of Mexico, in a 12-round bout for the WBC International Silver Bantamweight Title.