According to the Police, a dumpster blew up at 8:30 p.m. Saturday night in Chelsea area of Manhattan, New York, blowing out the lower windows of a 14-story residence for the blind. 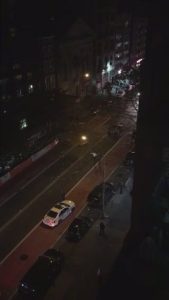 At least 26 suffered minor injuries from what may have been an explosive device, police sources said.

The explosion, described by one neighbor as “deafening,” happened outside the Associated Blind Housing facility at 135 W. 23rd Street. The facility provides housing, training and other services for the blind.
According to police radio transmissions, the people inside the facility have been initially told to remain inside as police began their investigation.

The Explosion comes barely 24 hours before the start of the United Nations General Assembly meeting.

Two buildings to the east of the facility were being evacuated. No fires have been reported, but multiple emergency vehicles, including ambulances, rushed to the scene.

“It was a quiet night, and then i heard this deafening boom,” said Jakir Aussin, who works at a Dunkin Donuts at 23rd and Sixth Avenue. “My first thought was, ‘Oh god, a bomb,’ so I got down on the floor.”

He added “I looked outside and it’s all broken glass, car alarms going off — I still don’t know what happened.”