Multiple suspects are still at large after firing shots early Sunday morning in a packed nightclub in Cincinnati, a major city in the mid-east U.S. state of Ohio, leading to one death, one in “extremely critical condition” and another 14 injured, local police said. 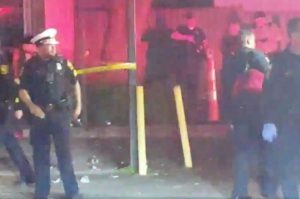 Obryan Spikes, 27, died in the shooting, Cincinnati police Chief Eliot Isaac said, putting the number of the injured at 15, one more than initially reported.

So far no arrests have been made, he said.

The investigation is ongoing, City Mayor John Cranley said, adding that the probe and the community’s healing will be a “long process.”

“The conflict is believed to have begun between specific groups or individuals earlier in the day, escalating and ultimately leading to this tragedy occurring at the nightclub,” Cincinnati City Manager Harry Black said.

Cincinnati Assistant Police Chief Paul Neudigate said that the police do not suspect this action as terrorism.

Hundreds of people were inside when the gunfire occurred in the Cameo nightclub after 1:00 a.m. local time (0600 GMT) on Sunday, Neudigate told the local WLWT TV station, calling it a “chaotic crime scene.”

“Saturday night, it is a very young crowd. We have had incidents here in the past, but this is by far the worst,” Capt. Kim Williams was quoted by a Fox News report as saying, noting the gunfire had prompted a lot of people to flee the scene.

“The biggest problem when you have a large crowd like this and the shots ring out, a lot of the witnesses disappear,” Williams said. Enditem