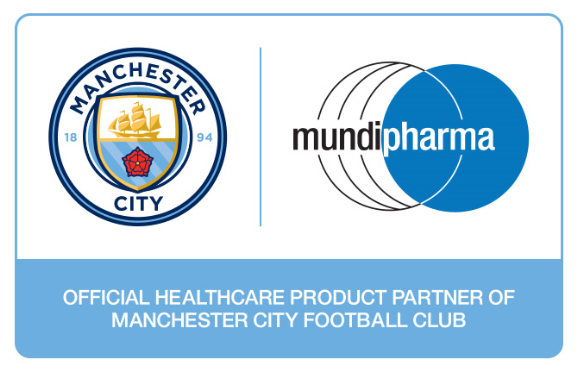 Premier League club Manchester City have signed healthcare and pharmaceutical business Mundipharma as one of their most recent regional partners.

The multi-year deal sees Mundipharma Pte Ltd named the ‘Official Healthcare Product Partner of Manchester City Football Club’ in Mundipharma’s markets in Asia Pacific, Latin America, the Middle East and Africa. It reflects both partners’ commitment to deepening the connection they have with their fans and people in those emerging markets.

Under the partnership, Mundipharma will be incorporating Manchester City branding in a selection of their marketing and advertising campaigns and the logo of its popular range of BETADINE medicines will feature on the sleeve of the Club’s medical staff at friendly matches in Asia Pacific, Latin America, the Middle East and Africa.

As the partnership progresses, Mundipharma will also collaborate with the Club to offer young fans the opportunity to travel to Manchester for an unforgettable football experience at the Club’s elite youth development and training facility, the City Football Academy. On the trip, young fans will enjoy training sessions delivered by qualified City Football Schools’ coaches dedicated to providing participants with an authentic Manchester City experience.

“We are proud to become an Official Healthcare Product Partner of Manchester City Football Club. Manchester City are one of the world’s best football teams and are known all over the world. Sports reaches and inspires people around the world. We intend to harness this power to raise awareness on key health issues such as preventing the spread of infectious diseases, which is a major focus for us in emerging markets where there have been a number of recent outbreaks.

“We are delighted to announce our partnership with Mundipharma, who like Manchester City continually strive for excellence. Their commitment to connecting with their in-market consumers in innovative and meaningful ways reflects that of Manchester City making them a fitting partner for the Club. We look forward to working together across emerging markets, where our fanbase also continues to grow.”

Manchester City, who have 400 million followers around the world, are currently enjoying a successful start to the season, under the guidance of manager Pep Guardiola.

Mundipharma’s emerging markets business has grown significantly in recent years and its medicines are distributed in more than 120 countries worldwide.

Distributed by African Media Agency (AMA) on behalf of Mundipharma.