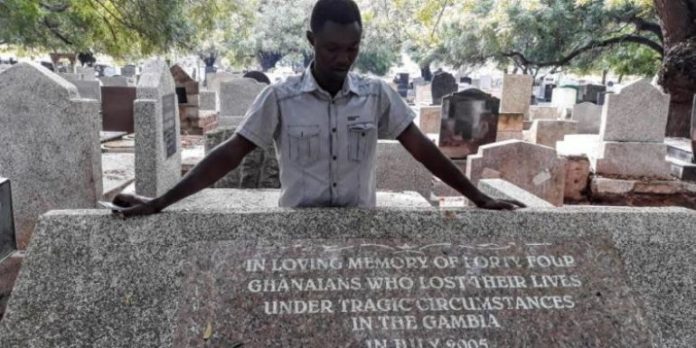 The Gambia Truth, Reconciliation and Reparations Commission (TRRC) has found former President, Yahya Jammeh, and 13 others criminally liable for the unlawful killing, torture and forced disappearances of about 67 West African migrants, including 44 Ghanaians.

Mr Jammeh has been found culpable on the basis of the confessions by the paramilitary group, who were under his direct command and control.

They carried out the extrajudicial killings of these migrants.

Again, his failure to take any measure within his power to prevent or repress the commission of the crimes or submit the matter to the competent authorities for investigation and prosecution, as well as the failure of his government to genuinely investigate and prosecute these crimes, among others.

Mr William Nyarko, Coordinator, Jammeh2Justice Ghana Campaign, briefing the media in Kumasi on the findings and recommendations by the Commission said the TRRC has therefore recommended their prosecution and also the establishment of an International Joint Forensic Investigation Team (IJFIT) based in The Gambia, which would comprise forensic investigators and scientists from The Gambia, Ghana, Senegal, and Nigeria, with the relevant skills, training, and background to carry out some tasks.

Mr Nyarko said the joint investigative team would ensure investigations without delay to identify the exact locations where the victims were buried, including the wells and graves mentioned by the witnesses that are located in both The Gambia and also in Casamance, Senegal.

It would also take all reasonable steps to ensure the security and full protection of all the sites where the remains were buried and yet to be exhumed for the purposes of protecting the human remains therein and from tampering with the evidence.

Again, the team would be given the mandate to exhume and conserve the remains of the victims that may be found in those wells or graves.

The team would be given the full cooperation of the Gambian authorities, including full access to all documentary, testimonial, and physical information and evidence in their possession that the Joint Forensic Investigation Team deemed relevant to the inquiry.

According to Mr Nyarko, who is also the Executive Director, Africa Center for International Law and Accountability, the Commission underscored the need for accountability and the importance of bringing to justice those who bear responsibility for the crimes committed against the West African migrants who landed on the shores of The Gambia on July 22, 2005.

The Jammeh2Justice Ghana Coalition, started campaigning when the news broke about the killings of the Ghanaians in the Gambia in July 2005.

Their efforts contributed greatly to bringing the issue into the limelight and for national discussion.

Similarly, all past and present governments contributed in bringing the unlawful murder of our citizens into the public and international domain.

This became necessary following new evidence by international partners – Human Rights Watch and TRIAL International, alleged that some Ghanaians were unlawfully killed by the Gambian paramilitary group on the orders of President Yahya Jammeh, who coincidentally had lost power and had fled into exile in Equatorial Guinea in January 2017.

Since the initiation of the campaign, the coalition has undertaken several activities including engagements with key institutions such as the Ghana Police Service, Ministry of Justice and Attorney General’s Department, Ministry of Foreign Affairs, the Presidency, Parliamentary select committee on Foreign Affairs, media, CSOs, and individuals, among others.