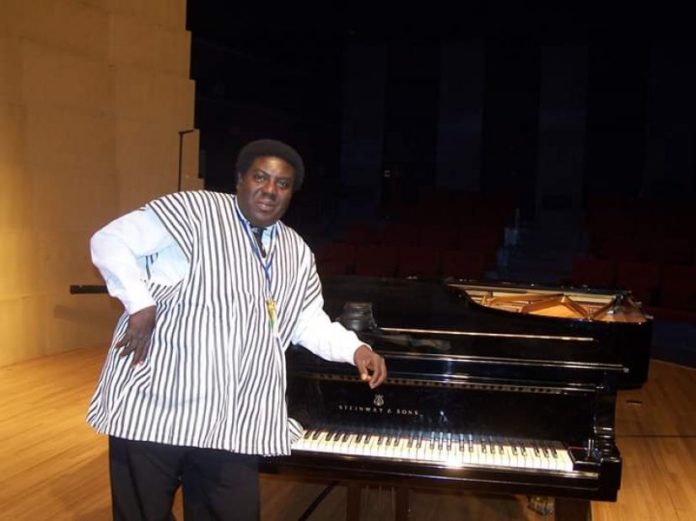 Late musicologist and music icon Kenneth Kwaku Avotri Kafui was on Friday eulogized for his care, concern and charity at a pre-burial service at the Madina Evangelical Presbyterian (EP) Church in Accra.

Music of various genres, with a number of musical instruments and voice accompaniments sounded at the chapel where the late professor, who taught music at the Achimota School, laid.

The body of the late composer, laid in a coffin painted white, with an effigy of a keyboard embossed on it as a testimony to the prolific composer who wrote the famous “Mida Akpe na Mawu, “Dzidzorm”, “Jesus my Protector”, “Kale”, “Asomdwee“ and “Help Me O Lord”.

Kenn also wrote many instrumental works for piano and for orchestra such as “Akpi Sonata”, “Pentanata” and “Dom ko Mayi.”

“As head of the Music Department, Kenn organised and conducted several music events such as the annual Festival of Nine Lessons and Carol, Speech and Prize Giving Days Founders Day service, Old Achimotans Memorial and Thanksgiving services and classical concerts.,” Achimota School said in a tribute.

It however pointed out that “the Pirates of Penzance” in 1985, was a challenging piece he came back to conduct on the occasion of the 90th anniversary of the school in 2017.

He was also one time guest composer of the nation’s broadcaster, the Ghana Broadcasting Corporation, and Director of the Abibigroma Theatre Company of the University of Ghana.

In an exhortation, Reverend Dzandu Hedidor , Moderator, Meridian Presbytery of the EP Church, urged humanity to use the talents there are endowed with fully to the advantage of their fellow men and to the glory of God.

The homily, based on the Book of 2 Timothy 4:6-8, reads: “For I am already being poured out like a drink offering, and the time for my departure is near. I have fought the good fight, I have finished the race, I have kept the faith.

“ Now there is in store for me the crown of righteousness, which the Lord, the righteous Judge, will award to me on that day—and not only to me, but also to all who have longed for his appearing.”

Reverend Hedidor eulogized Kenn Kafui for identifying his gift of music, and positively affecting the lives of others, for which he could say, ‘I have fought the good fight, I have finished the race, I have kept the faith.’

“He taught the mezzos and how to crescendo; the way he went about it taught you what gifts he had already.”

The cleric underlined that there is a reward from God for people who properly used their gifts, in appreciation of what He has done for them.”

“He did well in music and has excelled. So Kafui will always do, something in appreciation of God, or make a request of God in his music… He would perform for people to see how God makes himself manifest of how God had endowed them,” the Reverend Minister said.

Reverend Hedidor entreated the audience to go on using the resources, gifts and talents to the best of their abilities to manifest the glory of God.

After the Police Band had sounded Handel’s “Dead March from Saul,” pallbearers wheeled the coffin into a hearse of a mini bus to undertake the long walk to his rest at Hohoe.

A cortege of mourners, among who some repeated the positive impact the late Kenn Kafui had on them, followed.

Kenn Kafui was considered one of the leading composers of his generation in Ghana, in African art music, having composed choral works for choir and orchestra, symphonic works, piano, and organ works, and works for traditional African instruments.

He created new concepts and genres in African art music such as the Pentanata, the HD-3 form, and Drumnata.

Most of Kafui’s compositions are orchestral or choral works or pieces for solo piano.