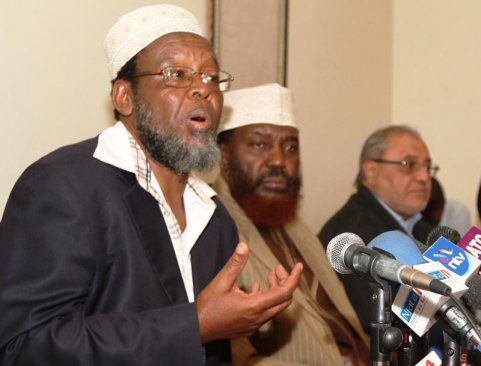 Speaking Thursday in Nairobi, the leaders commended Obama?s advice to the government to treat the Muslim community as close partners in efforts to isolate and root out the few bad elements who may be responsible for terrorism.

?The approach President Obama shared with President Uhuru Kenyatta is the same thing that Muslim leaders have consistently advocated for, instead of the policy of collective profiling and victimisation of Muslims,? said the Supreme Council of Kenya Muslims Director General Abdulattif Shaban.

The leaders called on the US to tie its security assistance to Kenya in combating terrorism to willingness by the government to end its alleged practice of collective victimisation of Muslims.

Executive Director of the Muslims For Human Rights Al Amin Kimathi said in the past, the US government has not been outspoken enough against what he termed as human rights violations of entire communities in Kenya in response to terrorism.

?Recently, there has been increased cases of reported disappearances and extrajudicial killings of Muslim youths. The illegal actions are a constant source of pain and agony for the affected families and breed anxiety and resentment in the whole community,? he said.

He criticised recent comments by Interior Ministry?s Principal Secretary Dr Monica Juma which appeared to justify last year?s mass arrests and detentions of people in Nairobi in response to a string of bomb attacks.

On his part, Vice Chair of the National Muslim Leaders Forum Yusuf Murigu welcomed the promise by President Uhuru Kenyatta during a joint press conference with Obama at State House to review and fine-tune counter-terrorism tactics so as not alienate various communities in the country in dealing with terrorism.

?While we fully support the government measures to weed out terrorism, we are concerned that the measures being taken often collectively target members of the Muslim community instead of going after the people who commit those criminal acts,? he said.

The leaders also claimed that many Muslim youths, especially in Northern Kenya and the Coast regions are having difficulty accessing education and employment opportunities due to inability to get identification cards from the state, making them vulnerable to being lured by criminal and violent groups that are behind terrorist attacks in the country.

?The government should not be seen discriminating against a section of the population. Disenfranchising a crucial segment of the society only serves to alienate and create resentments and despondency among youths,? said Kimathi.

During a joint press briefing with President Uhuru Kenyatta, Obama said that the US has come to realise through hard experience that collective punishment of communities in the fight against terrorism does not bring good results.

?If you paint any community with too broad a brush, then that can have the effect of actually increasing the pool of recruits to terrorism and resentment in communities that feel marginalised,? he said.

In response, Uhuru said his government is willing to improve its counter-terrorism measures by learning from the experiences of other countries.

?I am certain that as we move forward and learn from others, we will handle this situation in a manner that does not encourage this kind of activity on the basis of either marginalisation or people feeling that particular communities are being targeted in fighting terrorism, ?he said

By Ally Jamah, The Standard