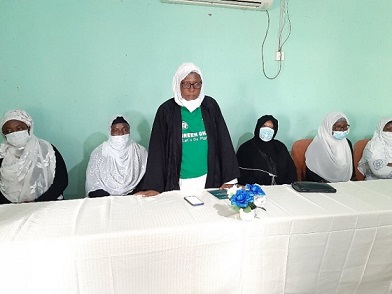 The National President of the Ahmadiyya Muslim Women’s Association of Ghana, Hajia Anisa Iddrisu Sahiba, has called on members of the Association to participate in the upcoming Population and Housing Census (PHC) for national development.

“I am encouraging you to come out and be counted. None of you should be left out, and if you are asked about your religion, our religion is Islam and we are Muslims. Do not say you are an Ahmadis. We want you all to be counted as Muslims,” she said.

Hajia Sahiba made the call when she met about 153 members of the Association, also known as Lajna Imaillah, from 13 circuits at Nalerigu, the North East Regional capital, as part of her nationwide tour.

The visit allowed the National President and her entourage to interact with their members and to encourage them to take up their responsibilities as handmaidens of Allah.

She said it was important for the Muslim women to take a keen interest in the PHC to propel development and entreated them to ensure that all their family members took part in the national exercise.

The National President, who is also referred to as Sadr, told her members that “Whatever we are doing, let us ensure that we are doing it with honesty and do it the proper way as members of Lajna Imaillah.”

She prayed for God’s blessings for them as His handmaidens in their various endeavours and grant them the grace to work as women and earn genuine capital to support their families and the works of the Association and the religion at large.

“As women, we have duties towards our families, already we are performing such duties, but we are encouraging you to perform such duties with much love. Do not create confusion in your homes, you must be very peaceful because our motto is love for all, hatred for none.”

Hajia Sahiba, who earlier planted a tree at a site designated for the construction of a mosque and mission house in the Region, said in commemoration of the Centenary Celebration, members in every country was mandated to plant at least 1,000 trees.

She said the Ahmadiyya Muslim Mission had already started its tree planting exercise in January 2021 and had so far planted about 800 trees in Ghana before the government’s Green Ghana project.

“We embarked on this exercise in January this year and when we heard of the government’s Green Ghana project we took the opportunity to acquire the free seedlings to aid our programme.”

Mr Karim Abdulai Issahaque, the North East Regional President of the Ahmadiyya Muslim Mission, said it was a blessing to have the National leadership of the Lajna Imaillah in the Region interact with its members.

Mr Issahaque noted that the National President had touched on very critical National issues, especially the PHC, and reiterated the need for women to take part in the exercise.