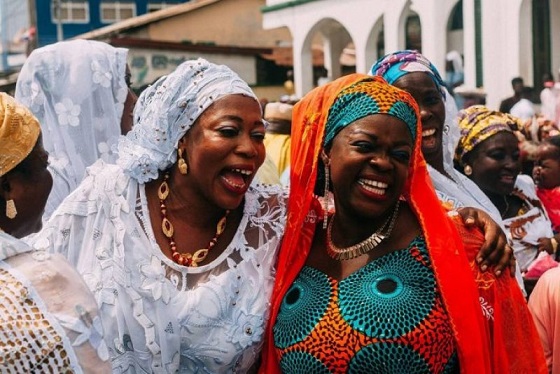 Some Muslims in Ashaiman-Lebanon celebrated Eid al-Fitr 2021 flamboyantly adorn in Islamic traditional fashionable clothes to mark the end of Ramadan.

The Ghana News Agency observed that as families’ troop to some traditional prayer grounds dressed up wearing fashionable cloths which is an assertion of religious and cultural identity with some sense of pride and dignity.

There was fashion diversity as mostly the elderly women dressed up in a more moderate way, the young ladies translated tradition into modern design cloths and clowned with the hijab which is the most common type of headscarf worn by Muslim women.

The women were also in their African Traditional garment with their “hijab”, some of the young women were in their “burqa”, cardigan Ramadan, lace stitching and hijab Abaya.

Others put on the niqab which is a combination of a head covering and scarf that covers a woman’s face except for her eyes.

GNA observed during the celebration that within Islam, dress codes refer to the principle of modesty and which includes behaviour as well as dress.

The GNA observed that the men were not left of the fashion parade as some of the men, noted in stylish designer pathani suits, Bisht, thobes, and kufis – rounded Islamic caps that are elegantly crafted for the incredible fashion lovers.

It was revealed that within the tenets of Islam as per the rules, men should cover their body, shoulders, legs and dress modestly with ethics at all times.

The fashion side of the prayer parade also saw some of the young men wore the men kaftan and smock.

A score of young Muslims wore their white casual Abaya with the hand, feet and nails decorated with henna, a dye prepared from plant lawsonia.

GNA, noted that, most of the women wore gold and silver necklaces with their black and gold purse beside them, while some of them were in their kitten heels, moles, flip flops and wedges.

Alhaji Ibrahim Ahmed Shaban, the Imam of the Shier Ahmed Mosque at Lebanon told the GNA that they observed the Ramadan peacefully, without any problem despite the Covid-19.

According to him, “it is a command from Allah for them to fast in any situation hence; they have to fulfill the command of the creator”.

Alhaji Shaban said, they were not happy praying separately because of the coronavirus, they had to adhere to the directives of the President and observe the social protocols for their own safety.

He advised that, the Muslims youth should concentrate on their works, studies and skills; they are acquiring in their lives and avoid social vices, which bring shame to the religion and family.

Hajiya Rabi Karim said, they were excited everything had ended serenely, “they pray that Allah will do away with the Covid-19, next year for them to celebrate the festival famously”.