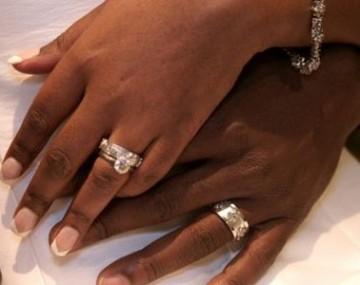 Aku finally nailed it. She got married to the love of her life, a 40-year old man, after two years of courtship without intimacy.

As tradition will have it, the lovebirds went naked the wedding night and kick-started their honeymoon with great joy in a calm atmosphere.

Barely two hours of pleasure and love making, Aku’s husband covered himself and left the bedroom to the washroom, still under the cover of darkness.

For two weeks, Joe, Aku’s husband would only make love to her in darkness.

Out of curiosity, Aku spied on Joe at dawn whilst he was taking a shower and uncovered that her husband was an intersex- having both male and female genitalia.

Aku felt betrayed and immediately demanded a divorce, with the fear that the condition could be hereditary.

Intersex is a general term used for a variety of situations in which a person is born with reproductive or sexual anatomy that doesn’t fit the boxes of “female” or “male.”

For example, a person might be born appearing to be female on the outside, but having mostly male-typical anatomy on the inside.

Sometimes, doctors do surgeries on intersex babies and children to make their bodies fit binary ideas of “male” or “female”.

Research shows that some intersex traits are obvious at birth, others only manifest during puberty, and sometimes a person can live their whole life without ever discovering that they are intersex.

Dr Anani said intersex was not so common in Ghana, however, it happens, “people have this condition and they hide it because it’s not accepted by society. In the past, we know that people have been killed because in some parts of the country it is a taboo for a mother to give birth to a baby with two sex organs”.

In reality, intersex is considered a birth anormally, but with a revised orientation on sexuality around the world, persons with intersex are calling for inclusion, arguing, they have a right to remain the way they were born.

“In a village called Nyankpala in the Northern part of Ghana, I can recall a typical condition where Salamatu gave birth to an intersex baby, she had to leave the baby for her husband because her father said the child was an abomination and should be killed.”

Dr Anani said Salamatu’s husband, however, refused to kill the baby leading to their divorce.

Over the years, intersex persons have had surgeries to reduce or reposition a clitoris- a surgical procedure usually called clitoroplasty – clitoral reduction or recession.

Surgeries like vaginoplasty; creating or altering a vagina are done when a child, considered intersex is under two years old.

The procedure to change intersex traits is often offered to parents and considered acceptable by some doctors when a child is very young.

Some human rights advocates have argued recently that having surgery on intersex babies means that people are denied important choices about their bodies—choices that can affect fertility, sexual function, and emotional well-being forever.

Dr Anani said due to the argument that operating on intersex babies was a form of human right violation, intersex persons are now allowed to grow and decide which sex they want at an adolescent stage.

He said although intersex doesn’t affect fertility, a lady may have a breast and a virgina, a womb, with a penis without testicles and in such instances, the penis is taken off for the person to be ‘fully’ a woman.

On the reverse, you get a man who possibly has breast, a penis with testicles, and a vagina without a womb.

He said intersex conditions usually come about when there is an abnormality during the formation of a baby.

He described intersex as a deformity, saying, the exact reasons why these things happen are still unknown. To buttress his point he asked; “If your son was born with an extra finger, would you leave it there, or have it removed”?

Although it is not confirmed whether Intersex is hereditary, experts say intersex persons could have ‘normal’ babies.

Some human rights advocates have called on countries to pass laws to stop all medical surgeries and procedures on the sex characteristics of intersex children unless there exists a real risk to the life of the child if the surgery is not performed.

Intersex persons are also calling on societies and individuals to stop discrimination against them in all facets of life.

Aku, after months of sober reflections, decided to inform her parents to dissolve her marriage.

At the family meeting, everyone insisted that Aku divorced her husband.

She was very emotive with confusion written all over her as the family accused her of bringing a bad omen into the family.

“It is a taboo to live with such a man, Aku, if you are not lucky you will only give birth to intersex babies if you and that man (Joe) start having children”, Aku’s Auntie said.

Joe’s newly wedded wife could not stand the pressure anymore and left the meeting.

When she went home to pack out of the marriage, she saw a note on the floor, her husband was at the verge of taking his life, at that point she knew the best thing she could do was to show Joe some love by accepting him and continue to be his wife.

After several conversations, Joe was able to convince Aku that his condition is not hereditary but a birth condition that may be operated on based on choices.

After months of consultations and some research, the couple overcame the challenge and found new ways of enjoying themselves.

“I think I have come to love who I am. I have what many don’t have and my wife is okay with it. We both play around them and we feel so good,” Joe said.

He said he feels a bit uncomfortable when among his friends but his new found happiness is rebuilding his confidence as a “real man”.

People like Joe, living in other parts of the world have called on governments to train medical professionals on how to confront the needs of intersex persons and immediate family members without violating the rights of the concerned persons.

In July 2019, Kenya became the first country to recognize persons whose sexual makeup does not fit into what is traditionally accepted.

It is not a crime to be born with two sex organs and it is important we stopped stigmatising persons with such conditions.

It is time Ghana and the rest of Africa, just like Kenya, show love to these persons and give meaning to inclusive growth.