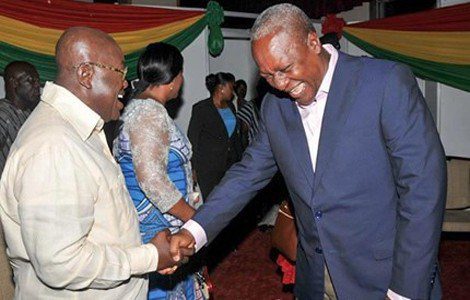 Former General Secretary of the opposition New Patriotic Party (NPP), Kwadwo Owusu Afriyie says he will die if Nana Akufo Addo is not elected president in the November 7 elections. Sir John as he is passionately called, noted that the only hope for Ghana is the NPP led by Nana Addo Dankwa Akufo-Addo which he believes will salvage Ghana from the mess created by President John Mahama.

He indicated that the nation will continue to be in a dilemma if President Mahama is voted again into power in the coming election. “I will die if Akufo Addo doesn’t become the president of Ghana. In fact, he is my last hope because we tired of the NDC” he said on an Accra based radio station.

The former chief scribe indicated that, President Mahama’s “incompetence” has led to destruction and suffering on the electorates after expressing optimism that the country’s “ailing economy, the frustrating power crisis and an unreasonable increase of tariffs” can never be solved under the NDC administration.

Sir John is of the firm belief that NPP cannot not make Nana Addo the president of the land but rather the electorates who he believes are feeling the pinch of the hardship under the Mahama-led government.

“Those who are facing challenges in the country are the ones who can make Nana Addo the president and not the NPP as a party” he noted.