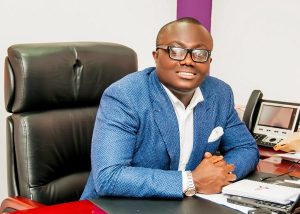 The Chief Executive Officer (CEO) of EIB Network Kwabena Anokye Adisi popularly called ‘Bola Ray’ has hinted that his suits and ties are partly sewn by Ghanaian tailors and not foreign made as speculated by a section of Ghanaian populace.

The host of Starr chat who celebrated his 40th birthday on March 1, 2017 is mostly spotted wearing suits and bow ties.

But speaking with renowned journalist Kwame Sefa Kayi on Starr chat, he indicated that he sews his suits in Ghana saying that is the secret most Ghanaians do not know.

He questioned if there was something wrong in one’s decision to consistently wear suits describing his tailor as a ‘fantastic’ person who sews for international stars as well.

Bola Ray indicated that he is only promoting made in Ghana goods adding that he often wears local fabrics on Friday and Sundays.

He revealed that his shoes are also made by a Ghanaian called Fred Degbe adding that he patronises made in Ghana goods including alcohol.

Asked what he represents when he wears suits, he retorted ‘ I represent me, my character, boldness, being outstanding in my field, same as I put on my African wear, and I represent that African dream that it is possible, so if you don’t know and you ask like you are asking me, suits made by a Ghanaian and I will proudly rock it, same as my shoes by a guy known as heal the world Fred Degbe. So that is it, so what, can’t a Ghanaian choose suits, because we want to be in western market and trail blazers and we supporting our own to do that, and we have great blazers and shoes, the fact that you look nice doesn’t mean that is western’.