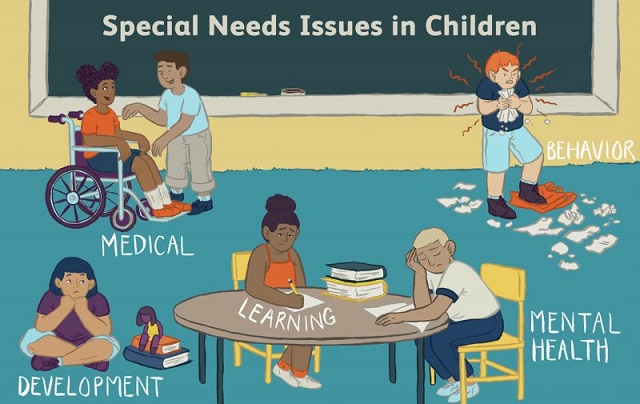 The Necessary Aid Alliance, a Non-governmental Organisation (NGO), has observed that there are myriad of challenges militating against performances of children with special needs in the mainstream schools.

Some of the challenges identified, included inadequate teaching and learning materials such as braille and optical devices, inadequate trained teachers with competences to handle special needs students, mobility challenges as a result of uneven grounds, and general lack of access to mainstream schools.

Mr Mulumba Ngmenlabagna Songsore, Executive Director for the Alliance, made the observation at an event in Wa to deliberate on the challenges of students with special needs in mainstream schools and the way forward.

It was organised by the Alliance in conjunction with Plan International under the “Youth Challenge Fund”.

Mr Songsore emphasised the urgent need for government to pay more attention to ensure that the state of inclusive education in Ghana was improved, which would help the education of children with special needs.

“Necessary Aid Alliance is using this medium to amplify the challenges students with special needs face in mainstream schools, some of the conditions identified are so appalling and very unfair to people who need our utmost support,” he said.

He said the commitment to achieving the Sustainable Development Goal on universal education and the provisions in UN Convention on the Rights of Persons with Disabilities, the Salamanca Accord and the 1992 Constitution of Ghana could not be realised “if children with disabilities or special needs are continually denied and also not motivated to participate in mainstream education system.

“Inclusive Education is an integral part of the many variables that drive development of every country hence considered as very important to the realization of the status of a developed world,” he said.

He identified lack of embosser machines and recorders as some of the challenges confronting the visually impaired students at the school.

“If you move to some of the communities, we have children with special needs, how do we bring some of these children on-board, it is a big challenge. …some parents will even tell you that there is no need sending such a person to school. It is a very bad attitude,” he said.

He appealed to parents, guardians and the general public to help such children in their homes and societies to also be educated.

Necessary Aid Alliance also distributed over 200 educational souvenirs to students with disabilities in the Region.

Students with special needs from the Wa SHS and some basic schools in the Wa Municipality and queen mothers attended the event.