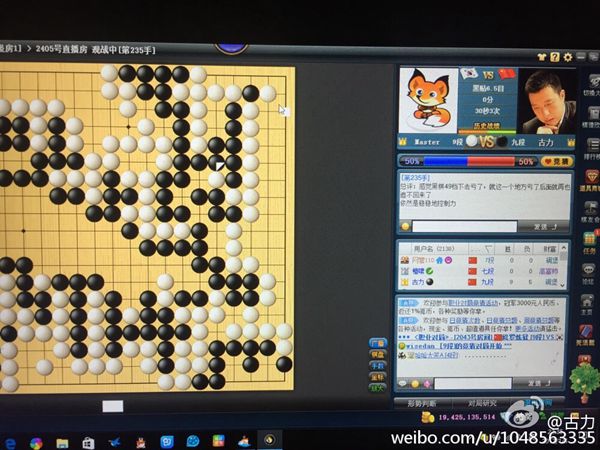 The mysterious “master” that has been beating elite Go players online has revealed its true identity as an updated version of AlphaGo, Google’s London-based AI firm, DeepMind announced.

The player registered with an ID of “Master” on Chinese online board game platforms eweiqi.com and foxwq.com and has won 60 fast-paced online matches since Dec. 29 against a group of elite Go players, including Lee Sedol’s compatriot Park Jung-hwan, Japan’s Iyama Yuta and China’s top players Ke Jie, Nie Weiping and Gu Li, triggering interest in its identity within the professional Go circle.

“Master” identified itself as AlphaGo after beating Gu Li on Wednesday. “I’m AlphaGo’s Doctor Huang,” the user “Master” wrote on foxwq.com, according to screenshots from media reports. Taiwanese developer Aja Huang is a member of Google’s DeepMind team, via whom AlphaGo played the game with.

DeepMind chief executive Demis Hassabis later revealed on Twitter on Wednesday that “Master” was a new prototype version of AlphaGo.

The “unofficial” games were designed to test the prototype, he said: “We’re excited by the results and also by what we and the Go community can learn from some of the innovative and successful moves played by the new version of AlphaGo.”

Hassabis said that the new version of AlphaGo would play official, full-length games later this year.

Go, originating from ancient China, is regarded as the most complex board game ever, and is famously difficult for computers to beat. But last year, AlphaGo showed the power of AI software when it shocked the Go world first by defeating a professional human player, Fan Hui, and then going on to beat Lee Sedol, one of the world’s best.

China’s world No. 1 player Ke Jie, 19, who was confident of outplaying AlphaGo after its victory over Lee, has reassessed the strength of AI-powered Go players after being defeated by “Master.”

“I have studied Go softwares for over half a year since March, learning theories and putting them into practice countless times. I only wondered why computers are better. Humans have evolved at playing games over thousands of years – but computers now tell us humans are all wrong. I think no one is even close to know the basics of Go,” Ke said on his microblog account.

He added late at night that he has just calmed down after losing the game. “The AlphaGo has completely overturned the control and judgement of us Go players for Go game. I can’t help asking, if one day in the future many years from now, you find your consciousness, knowledge, and choices you are used to are all wrong. And whether you will continue down the wrong path, or give yourself a chance to restart again?”

DeepMind chief executive Demis Hassabis posted an update on his Twitter account to unveil the identity of “Master” as a new version of AlphaGo. [Screenshot of Twitter]