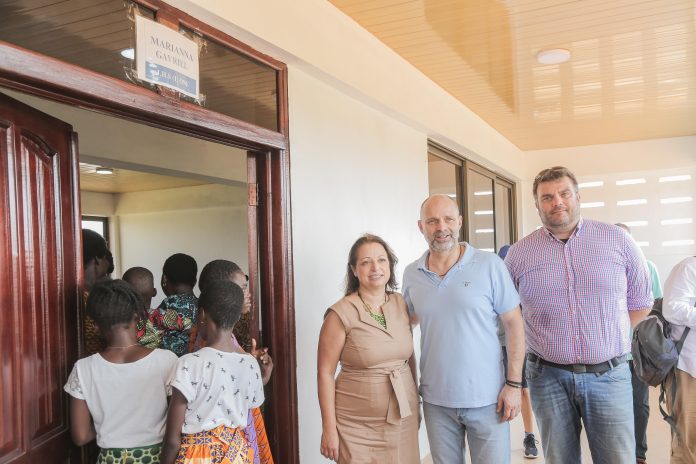 Mytilineos S.A., a Greek-based industrial conglomerate and the parent company of Metka Ghana, has inaugurated a three-classroom block for the St. Nicholas Charity Foundation, to augment the school’s current units.

The project, which cost more than GH¢200,000.00, is the latest support Metka is offering the school and goes to show the company’s continued commitment to the educational project of St. Nicholas Charity Foundation and further the development of the Tema Manhean community.

The opening of the classroom is in fulfilment of a promise made by Mytilineos S.A. via the signing of a Memorandum of Understanding (MoU) with St. Nicholas Charity Foundation, a school based in Tema Manhean, to finance the construction of the classrooms.

The agreement was signed on 11th July 2019 at the Bridge Power Plant site office in Tema.

The ribbon-cutting ceremony was undertaken by Ms Marianna Gabriel, a Director of Mytilineos Ghana and Honorary Consul of Cyprus in Ghana with support from a representative of the Paramount Chief of Tema Traditional Area, Nii Osangnaa Adjei Kraku II.

The support also follows Metka’s extensive social responsibility project in 2018 which included the building of a canteen for St. Nicholas Charity Foundation which now enables the children to sit together and learn from one another while having a meal. Also, Metka undertook a socio-economic investment in the Aboadze ultra-modern market.

In December 2013, Nii Osangnaa Adjei Okraku II, the Paramount Chief of Tema Traditional Area, announced that Tema Manhean will embark on a US$500,000 expansion project to benefit the community of Bankuman and surrounding areas.

The establishment of St. Nicholas Charity Foundation which currently has 157 children was initially funded by the Maria Tsakos Foundation and spear-headed by Madam Deborah J. Eleazar and Capt. Kappas.

The pupils of the school are being trained with Ghana Education Service certified lessons with extracurricular activities including sports, navy cadet corps, cultural dancing in addition to lessons in French and Greek language.

The school is an oasis of hope in the heart of Bankuman, a suburb of Tema New Town. Each September, the school accepts 15 to 20 children into their nursery and advances the highest class to the next level.

But due to the challenging environment in which the school finds itself and the struggle to build new classrooms, Mytilineous learnt of the predicament and wished to further assist as they recognised the wonderful education that these vulnerable children were receiving.

Since then, the dedication and commitment of Mytilineous is truly a miracle for these marginalised communities and what is encouraging is they maintain a contact with the children and some of their own staff volunteer to teach the children in their spare time.

METKA is the business unit of Mytilineos S.A. undertaking the construction of large-scale Engineering Procurement and Construction (EPC) projects, as well as high-value-added industrial manufacturing activities, used for applications in the energy, infrastructure and defence sectors.

The company is currently working on a 200 MW power project with 5 General Electric Gas Turbines type TM2500+, 5 Once Through Steam Generators and 1 custom-built steam turbine in combined cycle (CCGT) configuration, located in Tema, 16 miles east of Accra. The plant will be capable of being fueled by LPG, Natural Gas and Diesel.

A prominent medical professional, Dr John Moissidis also spent one week examining all the children and staff and gave some valuable advice to the community. Crew members of a leading airline also supported the charity by donating new uniforms, clothes, toys and books.

With its motto: EVERY CHILD DESERVES AN EDUCATION, St Nicholas believes in working with other charities for the benefit of all.