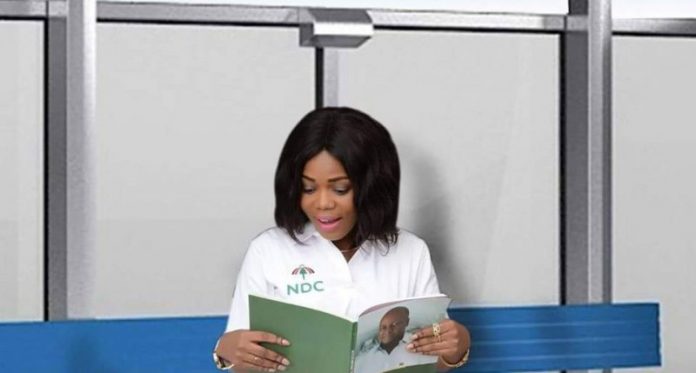 In response to comments by Lucky Mensah that the NDC is a party that kills the career of musicians, adding that the party has failed to manage the country well hence his decision to ditch them for the New Patriotic Party (NPP), Mzbel disputed the claims, describing it as unfounded.

According to her, as a musician “you support political leaders whose ideas and policies you think will benefit the country and not the political party”.

Mzbel explained that political parties are not responsible for marketing musicians even if they endorse them.

She indicated that “some of the musicians are greedy and sometimes go to all the political parties expecting to give their endorsement to the highest bidder and when it fails, they turn to say things that are not true.”

“We are role models; we should set an example. If you believe in what somebody is doing and you want to support, support freely. If you are rewarded later after your support, fine but if you are not rewarded, you take it in good faith, because whatever you did was for a good course. But if you demand from politicians and they fail you, then you go on radio, and television to insult and backlash; that is unfortunate.”

“Honestly, I was disappointed in Lucky Mensah for saying that the ruling NDC are career killers… because I know very well that the musician [Lucky Mensah] wanted to perform on the show but they didn’t put you there because; you this same person you are here you are there. It’s greed, so if you don’t get to perform on the show and you don’t get what you are expecting, then you say that the NDC are career killers?

“Meanwhile, in the last election, you got a car and money. You keep asking and the moment you ask and you don’t get, then you go and do something against the party. When you get, you change your mind, when you don’t get, then you say things that are untrue. I respect Lucky Mensah a lot but he is not doing this for the country. He is doing it for his own selfish reason… I am not against his political choice because we all choose based on our choices.

“So if you [Lucky Mensah] was given the money you want, would you have come out on radio and say things; and even lie…People who do that are not real and they shouldn’t be taken serious,” Mzbel told Rainbow Radio, claiming the car and money was handed over to Mensah by the late David Lamptey.