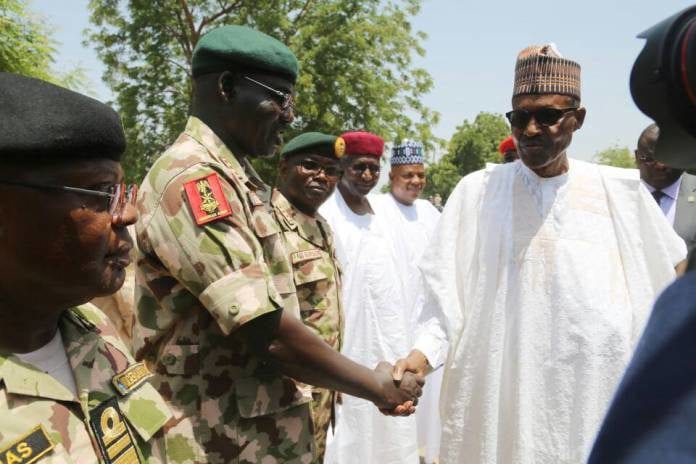 The Chief of Army Staff, COAS, Lieutenant General Tukur Buratai has a good knowledge of the culture and people of the Niger Delta region has served as Commander Two Brigade, Port Harcourt barracks when it was in Port Harcourt, Rivers state.

Since he came on board as Chief of Army Staff, Lieutenant General Buratai has been building bridges of peace and robust relationship between the army and the civil populace in the region.

Recently he was at Umuaji community, Asaba, capital of Delta state to flag off a free medical outreach for the civilian populace.  Community folks who participated in the exercise were full of praises for the army, describing it as a civil friendly military institution.

Contrary to fears that Operation Crocodile Smile which he launched to enhance security in the region was largely for the military onslaught in the region, it did not turn out to be so.  In cities like Warri, Sapele, Ughelli , the army went round donating exercise books and chairs to primary schools and pupils.

Soldiers even embarked on sanitation exercise at the popular Effurun market.  In Otujeremi community ,wheel barrows were donated to the community for use to clean up their market regularly.

Chairman of Uvwie local government council, Mr. Ramson Onoyake captured the minds of the people during   the sanitation exercise  by soldiers  at Effurun market, in his local government area when he said he was surprised

“I.am overwhelmed. This is the first time this is happening, soldiers coming to clean our market. When they came down from their vehicle people were asking what was happening until they started cleaning the market.

I encourage our youths to see the soldiers as friends. Our youths are peace loving and will continue to support peace in the local government and the state “, he said.

A bewildered President General Uvwie kingdom, Chief  Austin Ukugbere   spoke of the reformed army, saying before now residents in Uvwie fled at the sight of soldiers on the street but the foregoing had changed

“When soldiers appear people disappear in the past. But we can see that it is not so now. We are all happy with what the soldiers are doing. I also call on my people to continue to relate well with the soldiers “, he said.

With the bridges of friendship between the army and civilians in the region  it has not been tales of war, war with the boys in the creeks of the region.

As one who covered Lieutenant General Buratai when he was Brigade Commander, II, Brigade Port Harcourt barracks, he was then a Brigadier General, I saw his passion for peace in the state and the region.  He had his strategy with which he quelled militancy and reduced oil theft to its barest level.

His stay as Brigade Commander of the barracks largely gave him insight on how to make the army more effective in the region He drove  the creation of 6 Division in Port Harcourt, Rivers state  to  supervise military activities in four   core states of the region and establishment of additional Brigades , one in Asaba ,  Delta state and  another in Bayelsa state while II Brigade that was hitherto in Port Harcourt was relocated to Uyo, capital of Akwa Ibom state with Brigadier General  Hassan Amisu as the founding Brigade Commander.

He also won the heart of many in the region with the way he gave late General David Akpode Ejoor  a deserving military funeral on May 3rd at Ovwor Olomu, Ughelli South local government area.  General Ejoor was former Chief of Army Staff 1971 to 1975 and among other offices he occupied was also the first indigenous Commandant Nigerian Defence Academy. Former Head of State General Yakubu  Gowon who hailed the roles played by General Ejoor  to keep Nigeria recalled several military responsibilities he assigned Generral Ejoor , describing him as a brilliant soldier whose contributions to keep the nation united would remain evergreen.

Lieutenant General Buratai has always described the region as dear to his military career. Well done to a peace builder, a  General who knows when to deploy might for the common good.