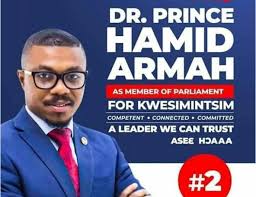 Dr Prince Hamid Armah, Executive Secretary for the National Council for Curriculum and Assessment (NaCCA) has secured his seat in Ghana’s next Parliament on the ticket of the New Patriotic Party (NPP) for the people of Kwesimintsim Constituency in the Western Region.

Party faithful and sympathizers of Dr. Armah surrounded the Party office at Kwesimintsim to share their excitement, expressing disappointment about the level of development in the area under the leadership of the incumbent.

Dr. Prince Hamid Armah is a Lecturer and an education and research consultant with teaching, research and policy engagement experiences in both the United Kingdom and Ghana contexts for over 18 years and currently the Executive Secretary of the National Council for Curriculum and Assessment (NaCCA), having been appointed by President Akufo-Addo.