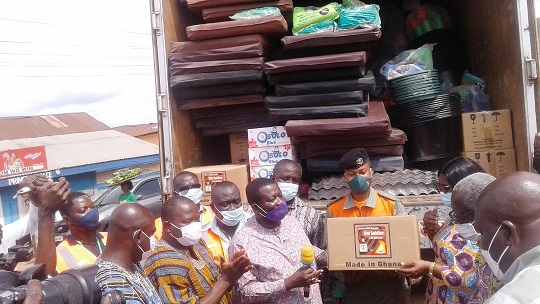 The National Disaster Management Organisation (NADMO) has called on the authorities to demolish buildings in danger of collapse to prevent the loss of lives.

Mr Eric Nana Agyeman Prempeh, the National Director of NADMO, said such dilapidated buildings were likely to crumble during a wind or rainstorm and could harm lives.

He made the call during a donation of relief items to the Birim Central Municipal Assembly in Oda to cushion victims of a recent rainstorm in the area.

He said though most disasters were natural, there were also some man-made ones and urged Ghanaians to be cautious.

Miss Victoria Adu, the Municipal Chief Executive and Chairman of the Municipal Disaster Management Committee, was happy about the donation and said they would be distributed to the victims accordingly.

On April 5, 2021, at about 1530 hours, a devastating rainstorm hit Akim Oda, destroying houses and school buildings and displacing scores of people.

Mr Yaw Osafo-Maafo, the Senior Presidential Advisor, assured the people that more relief items would be presented to them.

Mr Alexander Akwasi Acquaah, the Member of Parliament for Akim Oda, said letters were written to offices and companies for assistance and GHACEM, a cement company, gave 150 bags of cement to support the affected persons.