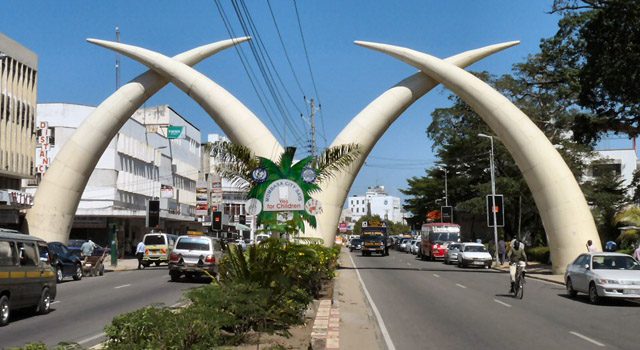 The distance from Mombasa to Nairobi is about 500km

The road is crucial for East Africa’s economy as it links the port of Mombasa to landlocked countries, such as Uganda, South Sudan and Rwanda.

The worst-affected area is around Taru, about 80km from Mombasa.

Correspondents say the jam has been caused by repairs to the road following heavy rains.

Traffic jams are common in Kenya and are often caused by its badly maintained road network but this is said to be the worst for several years.

Some motorists have been stuck in the countryside, miles from the nearest shop, since the jam began on Tuesday evening.

“I have not eaten since yesterday morning, not showered and not even changed clothes,” Nathaniel Chweya, a lorry driver taking 10 cars to the Ugandan capital of Kampala, told Reuters.

It is only the traffic heading towards Nairobi that is affected by the hold-up.

Some trucks that tried to turn off the single carriageway onto the scrub land alongside have become stuck in the mud.

The BBC’s Mohammud Ali Mohamed in Nairobi says there is a railway between Mombasa and Nairobi but it is old, unreliable and it takes several days to make the 500km journey.

Those who can afford it – and do not have heavy loads – tend to fly between the cities as there are hourly flights, he adds.