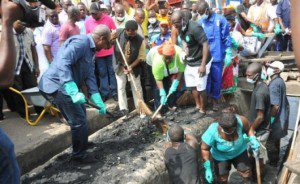 Namibia’s government and private sector have joined forces ahead of Africa Day, May 25, in a campaign to clean up the country that once had Africa’s cleanest city status.

Namibian President Hage Geingob has called on all Namibian citizens to clean up the country in order for Windhoek to reclaim its position as the cleanest city in Africa.

The campaign will be launched by the President on Friday and he proposed that on this day all Namibians irrespective of their geographical location go out in numbers and clean their areas.

In preparation for the campaign, the Secretary to Cabinet, George Simataa, recently received a consignment of cleaning materials from the private sector to be used during the clean-up campaign.

Namibia’s Information Ministry said in a statement on Monday that to further sensitize the people, the ministry together with the Environment Ministry will conduct civic education on the clean-up campaign at A. Shipena Secondary school on Tuesday May 22.

“The Environment Ministry will also be donating a hundred refuse bags to the school in preparation of the clean-up Namibia campaign,” according to the statement.

Meanwhile, one of the country’s largest holding companies, Olthaver and List Group, on Monday handed over to the Office of the Prime Minister, Disaster Risk Management Directorate, 300 cases of bottled water which will be distributed during the clean-up Namibia campaign.