Namibian President Hage Geingob said Tuesday that there is nothing wrong with belonging to tribes but people must not lose sight that they are Namibians. 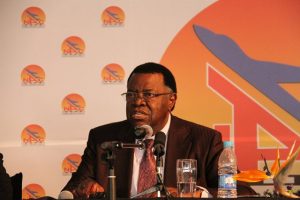 Addressing Cabinet members in Windhoek to mark the New Year, Geingob said the members should “take heed of and be wary of the centrifugal force which is spurning the ever-simmering tribalism threatening to place our well managed governance architecture into disrepair”.

“I have said it on many occasions that our tribes are part and parcel of our genealogy and African heritage, and we should be proud of who we are,” he said.

He also said there is no separatism in the Namibian house where all areas are open to all inhabitants whether related or unrelated.

“It is a house in which all Namibians are united by the need for economic emancipation and inclusive economic development,” he said.

Geingob said there are some people are determined to ridicule the concepts put in place to accelerate development.

His comments come after calls by a group calling itself the Landless People’s Movement that is led by former land reform deputy minister Bernardus Swartbooi whom he sacked Nov. 2016.

Swartbooi’s group has also handed over a petition to parliament Tuesday demanding that the Land Bill should not be re-tabled until the second land conference has been held.

Land reform minister Utoni Nujoma wanted to re-table the Land Bill which he withdrew last year after some opposition parliamentarians had raised concern with some clauses.

Geingob has, however, already ordered Nujoma not to re-table the Bill until after consultations have been done.

“As Cabinet, we should ensure that we extensively deliberate on the land issue, in order to come up with concrete proposals that could take us forward rather than backwards,” he said.

“Let those who are holding gatherings on the premise of ancestral land to come up with proposals that are acceptable within the context of a united, free and reconciled Namibia.” Enditem