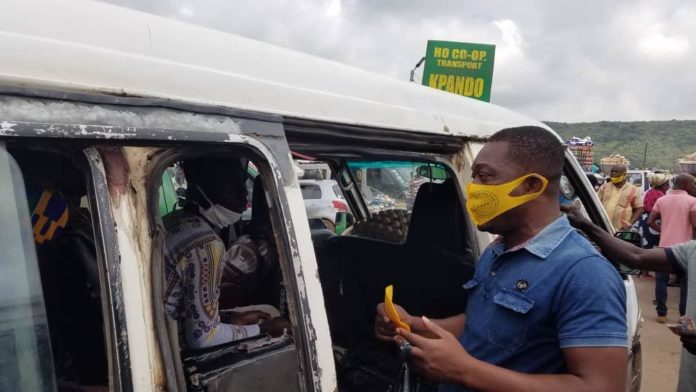 Amid COVID-19 travel restrictions, short and long-distance transport operators in Namibia have diverted to alternative routes to eke a living.

Taapopi Elia used to drive long-distance between capital Windhoek and Oshakati in the northern part of Namibia. But since the Namibian government imposed restrictions and curfew in Windhoek, he decided to seek alternative routes. He fled the city on Aug. 12.

Namibian President Hage Geingob on Aug. 12 imposed travel restrictions in Windhoek including surrounding towns Rehoboth and Okahandja to minimise the spread of COVID-19 amidst increasing cases. Ordinarily, dwellers are not allowed to leave or enter areas on lockdown without a permit.

“The moment the announcement to lockdown Windhoek and surrounding towns was made, I left the city to seek alternative routes in other areas across the country,” he said Friday.

Since then, according to Elia, he transports passengers between Oshakati and Otjiwarongo in central Namibia, as the areas are not on lockdown.

According to Elia, the move was motivated by economic prospects.

“It is better to seek alternative ways to make money than starving in Windhoek. If I had stayed in Windhoek, I would not have been able to generate an income to support my family and meet personal needs,” he said.

He is not the only one. Werner Shilongo used to drive a bus between Windhoek and Tsumeb in Oshikoto region. He too fled Windhoek.

But instead of continuing with long-distance, he diverted to the short distance between Tsumeb and Grootfontein.

Another driver Johannes Andreas said that to eke out an existence, he opted to flee Windhoek and drive commuters between Oshakati and Outapi in the Omusati region.

“Although the income generated is not that much due to restrictions in place regarding the number of passengers to carry, it is better than being locked down in the city with no income at all,” he added.

Meanwhile, the drivers say that they are serving as agents in the fight against COVID-19 by enforcing compliance amongst passengers.

“We sanitise the passengers, do not allow passengers without masks to get into the car as well as limit the number of passengers to ensure social distance,” Elia said.

The diversion of trade is not limited to transport operators. But informal traders too. Linea Silas sold at a local primary school in Windhoek. With lower grades at schools closed, she too fled to the village.

“Staying in Windhoek would have made my life difficult also because I relied on sending my supply with the halted public transport operators. Now I sell at an informal trade centre in our village,” she said.

However, officials say that those fleeing urban areas to rural areas pose a high risk in spreading the virus. The Namibian government has advised nationals to postpone non-essential travels.

Minister of Health and Social Services, Kalumbi Shangula said that regulations also dictate that only a restricted number of people are permitted in a car at any point.

“Those who travel are also advised to self-quarantine upon arrival at their destinations during their stay,” Shangula said.