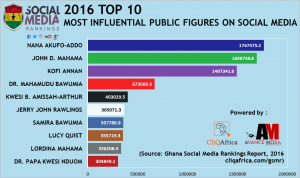 President Nana Akuffo-Addo in 2016 also gained the highest number of new followers among his competitors on the list numbering 935,145 which was also coupled with the highest number of engagements across Facebook and Twitter.
His closest contender H.E John Dramani Mahama, who ranked higher than him in 2015 also gained new followers in 2016 numbering 713,788 whiles former UN Secretary General also gained 359,951 new followers.
The ranking which is focused on Diplomats, Political and Business leaders was compiled aside other 19 categories in the 2016 Ghana Social Media Report in the pioneers’ role in improving the social media landscape across Ghana and beyond.

Full report of the 2016 Ghana Social Media Rankings are available on www.cliqafrica.com/gsmr

Below are the 2016 10 Most Influential Public Figures on Social Media:

Other Public Figures who have the potential of making the next ranking include; Anas Aremeyaw Anas, Samia Nkrumah, Hon. Zanetor Rawlings and Hon. Ursula Owusu
The ranking which was based on the GSMR Score was analysed from their Social Media followings, Growth Difference, Engagements, Post Reaches and Mentions.
The 2016 Ghana Social Media Rankings and Report was conducted by Avance Media, CliQAfrica and Dream Ambassadors Foundation GH.