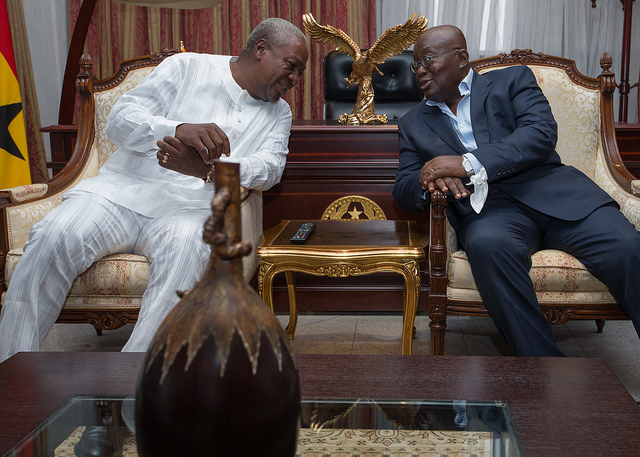 President-Elect, Nana Akufo-Addo, has asked Ghanaians to express gratitude to President John Mahama for his show of maturity in defeat during the just ended general election, and the ensuing transition process.

Nana Akufo-Addo said President Mahama demonstrated that he was a true democrat who had the development of his nation at heart, when he committed to a smooth transition of power by conceding following his defeat.

Speaking at a meeting with the leadership of the Ghana Catholic Bishops Conference at his Nima residence on Friday, Nana Akufo-Addo intimated that, Ghana would not be enjoying the current peace and stability if President Mahama had refused to concede defeat.

“I think all of us in Ghana have to be thankful that we have in him [Mahama] a man who is also devoted to the peace and stability of our country. He has comported himself in a manner to ensure a smooth transition.”

“We believe that the manner in which he is going about it, is reassuring to our peace especially when you see what is going on in other parts of our continent and we have to be thankful for that,” the President-elect said.

Nana Akufo-Addo also acknowledged the special circumstances which saw President Mahama assume the mantle of governance following the death of President John Atta Mills in 2012, and hailed him for standing up to the challenge.

“He came to the office during a delicate moment in the history of our nation and he stepped up to the bench. He has held the state together.”

Nana Akufo-Addo further expressed hope that he and President Mahama could “continue to work towards a peaceful and stable Ghana which is all that we want.”