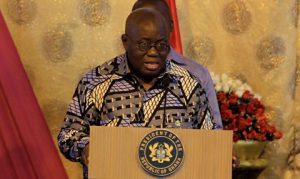 “It’s been 100 days and counting since the Akufo-Addo regime came into office and many important things that need to be in place before the government can fully take off are still pending.

Mr Adjei, who is also a leader of entrenched workers at Ghana Ports and Harbours Authority (GPHA), struggling for the payment of their ex-gratia since 2002 said in a statement that he and his comrades have been waiting with baited breath for the Akufo-Addo regime to jostle into place so that they could take up the matter with the new government.

“Out of the over 3,000 former employees of the GPHA who were retrenched in 2002, only five have had their severance benefits fully paid to them.

“The remaining colleagues have been fighting for justice in the past 14 years, and many dying of melancholy and abject poverty,” the statement said.”