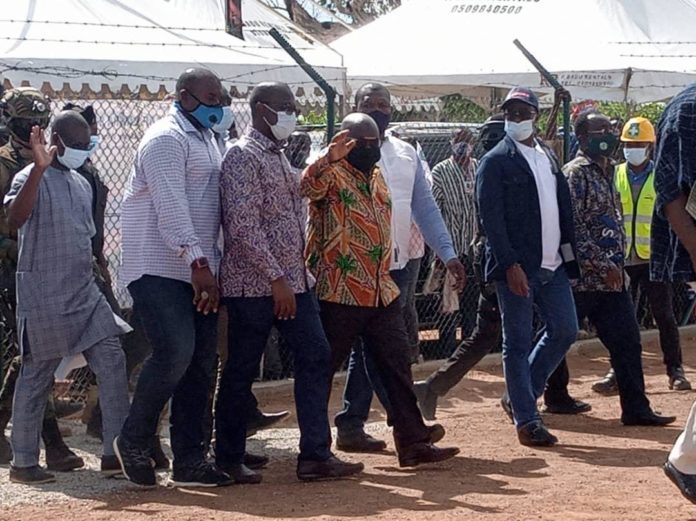 President Nana Addo Dankwa Akufo-Addo has cut the sod for the construction of the Dipke Bridge and the Lawra town roads to open up the area to socio-economic development.

The 275 meter-long bridge to be constructed over the Black Volta, is expected to link up Ghana and Burkina Faso, thereby, promoting the movement of goods and services between the two countries.

Cutting the sod for the commencement of the project during his two-day working visit to the Upper West Region, President Akufo-Addo stated that the project would cost the government over 26 million Euros.

He noted that the project when completed, would serve several purposes including opening up communities in the area, strengthen regional integration, improved all-year-round access to schools, hospitals, and markets.

It will also eliminate interruptions in transporting people, farm produces, and other items during the rainy season and eliminate long tours resulting in reduced transportation cost and travel time.

President Akufo-Addo noted that the government of the New Patriotic Party (NPP) was a government that delivered on its promises to the people, stressing that they promised to construct a solar power plant and the Dikpe Bridge and as well upgrade the Lawra District to a Municipal status and they have delivered.

He, therefore, appealed to the people to vote to retain the NPP in power to continue to deliver development to Ghanaians.

The President introduced Mr Anthony Abayifaa Karbo, Member of Parliament (MP) for Lawra Constituency and the Deputy Minister of Roads and Highways as the NPP Parliamentary candidate for the 2020 Elections and urged the people to vote for him to continue to work for them.

“He is a vibrant young man and since he became your MP and Deputy Minister of Roads, he has never disappointed you and you need to maintain him and the NPP to continue to do great things for you”, he appealed.

Mr Kwesi Amoako Atta, the Minister for Roads and Highways said the bridge when completed, would bring to an end the dangerous use of canoes on the Black Volta.

The project, which is being constructed by Messers Engineering Services Limited is expected to be completed in 24 months.