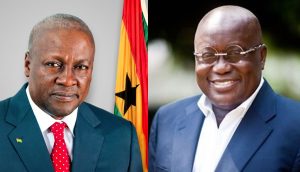 He said the Government of Ghana under the National Democratic Congress had negotiated a facility with the Canadian government to support the agricultural sector, which President Akufo-Addo failed to tell Ghanaians, but rather decided to use it as the financial backing to execute his ‘Planting for Food and Jobs’ programme.

Contributing to the debate on the 2017 State of the Nation Address, Mr Opoku, who is also the Member of Parliament for Asunafo South in the Brong Ahafo Region, said the negotiation on the facility started in 2015.

He said Dr Yakubu Alhassan, the then Deputy Minister of Food and Agriculture, representing the Republic of Ghana, put up a consortium to negotiate for the facility, with the title “Modernising Agriculture Productivity through Local Economy.”

According to the former Minister, the intention was to strengthen the decentralised structures of the Ministry of Food and Agriculture to enhance extension services of the farmers in the country.

He said it was surprising to hear the President talking about same facility to support his Administration’s programme called ‘Planting for Food and Jobs’ which is not captured in the agreement signed between the Canadian government and Government of Ghana.

Mr Opoku pointed out further that the 125 million dollars facility was a conditional budget support which compelled the country to sacrifice to meet the requirement of IMF reform performance.

The Asunafo South lawmaker said the NDC had built a solid economic foundation, on which President Akufo-Addo was dwelling to execute a number of projects, but the President rather chose to tell the people that he inherited a bad economy.

Mr Opoku said under President Mahama, special policy initiatives such as the establishment of the EXIM bank were implemented to address the fundamental challenges facing the economy.

As at the time the NDC government was leaving power, an amount of GHC 250 million had been lodged in the fund, Mr Opoku said.

Also, to deal with the country’s debt, he said the NDC government established the Sinking Fund with US$350 million in its account; US$ 261 million was also put into the Heritage Fund, US$150 million into the stabilisation Fund as well as GHC 50 million into the Contingency Fund.

Dr Kwabena Twum (NPP) MP for Berekum East blamed the past NDC Government for weakening a number of health programmes, saying almost everything was being bought at the health institutions.

He said the speech of the President was that of hope to restore weakened programmes for better health care delivery.