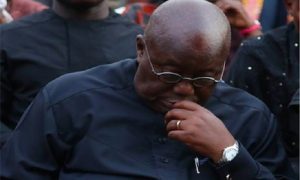 The declaration is constitutionally mandated of all public officers and comes after the president had tried but was unsuccessfully in declaring his assets.

President Nana Akufo-Addo had a taste of the inefficiencies in Ghana’s public service when he attempted to declare his assets to the Auditor General.

The president was hoping to fulfill the constitutional requirement of declaring his assets upon assuming the highest office of the land but that could not happen because the Auditor General’s department has run out of receipt books.

The president was said to be shocked when the official he sent to carry out the obligation, reverted with the news. The receipt book is needed to serve as proof that the mandatory exercise of asset declaration had been carried out by the president.

The situation was compounded when the official asked that a phone call be placed when the department had been restocked with receipt books so he could come back.

Surprisingly, he was told the landline phones at the department were also not working.