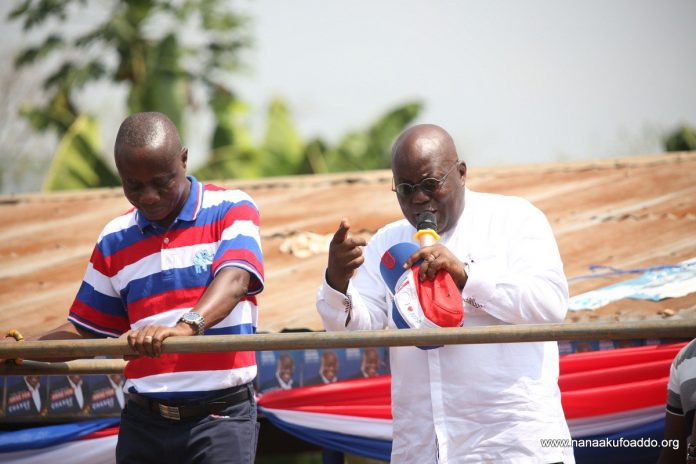 “I will never let you down,” he said, given the assurance that the “new leaf of relationship” between the Region and the NPP would result in exploration of oil, construction of a harbour and a landing site with storage facilities at Keta.

Nana Addo was addressing the first regional rally at Aflao in the Ketu South District of the Region on the theme: “The role of the Voltarian and the change agenda for jobs.”

He reiterated the commitment of the next NPP government to re-direct the capital expenditure of the country by establishing a factory in every district and giving every constituency a million dollars.

“I promise to implement each of these. We are building a new Ghana where promises are worked out for the progress of the people…we are embarking on a new path of development and progress and you must all ride on the back of the elephant for victory in 2016,” he said.

Nana Addo said President Mahama: “Can see the stool shifting under him and [resorting] to tribal politics but we in NPP are turning away from tribal politics and politics of yesterday.”

Alhaji Mahumudu Bawumia, NPP Vice Presidential Candidate said a new Ghana would be given birth to in a few days to see the restoration of leadership of integrity and restoration of allowances to teachers and nurses.

Madam Otiko Afisa Djaba, Women’s Organiser of the NPP said Nana Addo was not coming into power for himself but for the people and said he was the only one who could transform the country’s economy.

Mr Sammy Awuku, NPP National Youth Organiser expressed gratitude to the Region for “showing love to the NPP” and said this year’s election was a fight for the youth and survival of the country and asked the electorate to go out and vote massively for the NPP.

Mr Peter Mac Manu, NPP National Campaign Manager said he was excited that the Region had accepted the “agenda for change” and said the signs were clear on the walls for change and asked the people to help the NPP protect the ballot.

Mr Peter John Amewu, Regional Chairman of the Party said the Region remained committed to its “Operation Eagle Eye” on Election Day and reminded the electorate to be vigilant at the polling stations.

Nana Addo introduced parliamentary candidates of the Party in the Region to the electorate and urged them to vote for them.