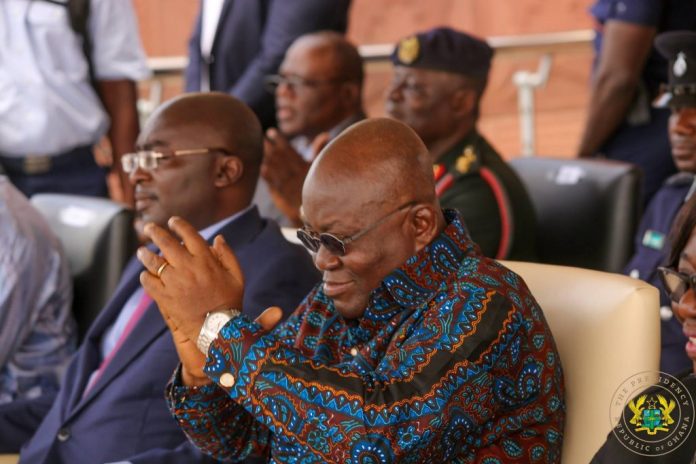 President Nana Addo Dankwa Akufo-Addo, on Wednesday launched the “Planting for Food and Jobs” campaign, with a pledge to modernise agriculture and improve production for national food security.

The campaign is an intervention and forms part of government’s efforts to generate more wealth in the agricultural sector, improve livelihood of farmers and fisher folks and help grow the national economy.

President Akufo-Addo at a colourful durbar at Goaso in the Asunafo North Municipality of the Brong-Ahafo region said his government was poised to pursue a value addition strategy aimed at rapidly stepping up agro-processing and developing new and stable markets for products.

According to the President, the World Bank estimated that agriculture and agric-business could command a one trillion US dollar presence in Africa’s regional economy by 2030, compared to 313 billion dollars in 2010.

“The importance of agriculture to Africa’s determination to maintain and boost high growth rates, create more jobs, significantly reduce poverty, and grow enough cheap, nutritious food to feed its families, export its surplus crops and safeguard the continent’s environment can therefore not be overstated”.

President Akufo-Addo indicated that the country was making some progress especially in the cocoa sector but “nowhere near enough in the staples, like rice, maize, and soya”.

“If we are to make headway, there should be a fundamental change in the attitude towards agriculture, agriculture is not and cannot be single-crop industry. Farming is a business and it is a profession that must be promoted and studied like all other professions”, he added.

President Akufo-Addo said his government had put in place necessary measures to ensure that the success of the programme citing that a total of 390 metric tonnes of certified leguminous seeds including cowpea, soyabean and groundnut would be produced and distributed to farmers.

To ensure that good quality fertilizer was readily available to the farmer at affordable prices, President Akufo-Addo said his government had reduced the prices of the commodity by 50 percent and expressed appreciation to the Canadian government for supporting the programme with 125 million Canadian dollars.

Dr Owusu Afriyie Akoto, the Minister of Food and Agriculture said this year the programme would focus on a selected target group of up to 200,000 farmers in all the 216 districts of the country.

He said 1,200 unemployed graduates from five colleges of agriculture had been recruited and trained to provide extension services.

Dr Akoto announced that the World Bank had pledged to support the project with the sum of 50 million US dollars and expressed the hope that other development partners would also support the programme.

Pemapem Yaw Kabrese II, the President of the Brong-Ahafo Region House of Chiefs, lauded the programme and advised Ghanaians in general to support its implementation.