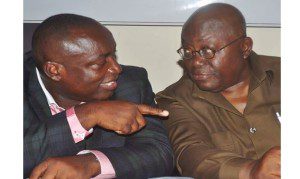 General Secretary of the New Patriotic Party, Kwabena Agyei-Agyepong, has rubbished claims he is working against the party?s flag-bearer, noting he is rather being sidelined in the affairs of the party.

Mr. Agyepong who is currently out of the country told an Accra-based radio station, Okay FM Monday morning that he was kept in the dark on the exact date Nana Addo Dankwa Akufo-Addo was to begin his ?Rise and Build?campaign tour.

He said although he was instrumental in making the decision for the Volta Region to be the first point in the campaign, and even asked that preparatory work be done, the issue of date never came up for discussion.

As at August 21 when he left Ghana, he said Nana Akufo-Addo had not made any arrangement as to when he intended to start the tour for which he was informed.

He said at the party?s National Executive Council meeting, there was no indication that the date of the national tour was September 2, until he read a statement by Nana Akufo-Addo?s spokesperson, Eugene Arhin on September 1.

?Never was a date communicated to me, meanwhile, I informed him [Nana Akufo-Addo] before I left,? he said.

Mr. Agyepongsaid he was the one who even advised Nana Akufo-Addo two months ago to start the tour in the Volta Region because the party wants to make inroads that region.

?Clearly there is orchestrated to attack on the Gen Sec. You can see that there is an orchestrated effort to project me, the General Secretary as someone who wants to run down the flag-bearer,? Mr. Agyepong claimed.

He particularly narrated how he was sidelined in the visit by the Nana Akufo-Addo to the scene of the June 3 disaster and a recent trip to James down. In those occasions, he said he was left behind by the convoy and had to rush there on his own.