President Nana Addo Dankwa Akufo- Addo, on Tuesday rallied his countrymen to throw their weight behind his good efforts and that of government to sail the nation through to higher and better socio economic position. 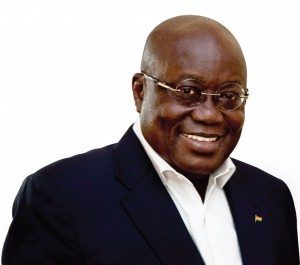 The nation needs aid, but his vision, endorsed by the overwhelming victory at the last general polls, is to build a nation that is self-sustaining.

“It is a Ghana beyond aid,” he said, and added, “Mr. Speaker, thank you, and may God bless our homeland Ghana and make her great and strong.”

Delivering his first State of the Nation Address to Parliament on Tuesday, President Akufo- Addo, said: “We will set upon the path to build a Ghana that is not dependent on charity; a Ghana that is able to look after its people through intelligent management of the resources with which it has been endowed.

“This is our path, and this path offers a new Ghana.

“This Ghana will be defined by integrity, sovereignty, a common ethos, discipline, and shared values. It is one where we aim to be masters of our own destiny, where we mobilise our own resources for the future, breaking the shackles of the “Guggisberg”colonial economy and a mind-set of dependency, bailouts and extraction.

“This requires a forward-looking vision for our country, enabling us to confront our challenges and embrace our opportunities, not one fastened in the rear-view mirror.

Sporting, a black coat over white shirt, with silver coloured tie and pair of black shoes to match, the President arrived in the chamber of the august house, welcomed by the throbs of big drums and rich cultural performance and display.

Outside, the avenue trees that lined the street leading to the Chamber Block were painted in the Ghana national colours of red, yellow and green.

Many more vehicles added to those already in the car park in front of the Chamber Block and the Banquet Hall, to signify the arrival of the President who inspected a guard of honour by a contingent of security persons.

The fountain in front of the Chamber Block spewed and gushed water into the air as part of the activities marking the “big day.”

President Akufo Addo, arrived with his better half, Rebecca; his Vice Alhaji Dr Mahamudu Bawumia, and sat regally in the Presidential Stool, as he waited to be called upon by Speaker Rev Prof Aaron Michael Ocquaye to deliver the address, which was in fulfillment of a constitutional requirement.

Former Presidents Jerry John Rawlings and John Agyekum Kufour, Former Speaker Ebenezer Begyina Sekyi Hughes, the Clergy both from the Christian and Islamic faiths, Members of the Diplomatic institutions and bodies, Traditional Rulers, Service Commanders, and a cross section of Ghanaians were in the House to be all ears to the delivery of the first gentleman.

And the majority of Ghanaians, who could not come to the Parliament House, watched or listened to the event, live via a number of television and radio networks.

President Nana Akufo-Addo on behalf of Ghanaians thanked God for His Grace and Favour for a peaceful and smooth transfer of power; former President John Dramani Mahama for his leadership and his role in the transition, describing his conduct as being a credit to the nation.

He said the Ghanaian people are to be commended for their strong attachment to the principles of democratic accountability.

He said: “It is good to be back here again in this Chamber, where I spent 12 memorable years as a Member of Parliament. I recollect with nostalgia the vigorous debates of my days here as a Minority MP, and I have very fond memories of being on the Majority side also.

President Akufo-Addo used the occasion to commend the Electoral Commission and its Chairperson, Charlotte Osei, for the conduct of Ghana’s recent elections, which had received both domestic and international acclaim.

He was hopeful that Ghana’s electoral processes would become even more robust, so that free and fair elections become automatic parts of Ghana’s democratic culture.

Ghana is ready to work, and it will not be “business as usual,” he cautioned.