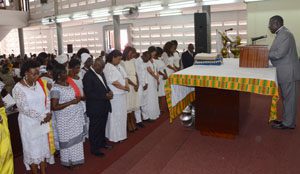 Nana Addo Dankwa Akufo-Addo and his family on Friday celebrated the 10th anniversary of their late mother, Adeline Ama Yeboakua Akufo-Addo, the late Kyidomhemaa of Kyebi with a thanksgiving service at the Presbyterian Church of Ghana, Resurrection Congregation, Makola in Accra.

The Service was attended by high-powered members of the New Patriotic Party (NPP) and well wishers.

Rev. Col. David Adoteye-Asare (Rtd), agent in charge of the Resurrection Congregation, in his sermon, entreated each and everyone to live a good and exemplarily life so they would also be remembered by their children and families, urging that, ?We should learn to forgive those who offend us, even our enemies, so we would also be forgiven of our sins by our father in heaven.?

Nana Addo began his tribute by reiterating a statement made by former President Kufuor, in his tribute to the late Aderline Akufo-Addo at her funeral in Kyebi 10 years ago: ?With her passing, a most significant chapter has been closed not only in my own life, but indeed, in our dear motherland Ghana.?

He said the late Aderline Akufo-Addo was a striking member of the generation that made the decision to end Ghana?s colonial status and usher her into freedom and independent nationhood.

?She was an active participant in the historic developments that gave birth to modern Ghana?the formation of the UGCC, the 1948 riots, the arrest of the ?Big Six?, the Watson Commission, the division of the nationalist movement with the emergence of the CPP and the turbulent politics of the 1950s.

?Through it all, she remained loyal, generous, warm, high-spirited and loving companion to an ambitious lawyer/politician,? Nana Addo said.

He said Aderline Akufo-Addo excelled as a mother of four young children, encouraging them in their growth and instilling in them a will to succeed captured in her often-stated principle: ?if you first try and don?t succeed, try, try and try again.?

?Great lady, fare thee well. We miss you enormously. You did so much more than was expected of you. Continue to rest in peace in the bosom of the Almighty until the last day of the resurrection when we shall meet again.?

Nana Addo and his family donated an amount of GH?10,000 to support the development of the church.

Nana Addo on his way out of the church premises received a lot of cheers from the people outside who came to take a glimpse of the remembrance ceremony.

In 1970 she became the first lady when her husband, Edward Akufo-Addo was president of Ghana.

On Sunday March 21, 2004, she was taken ill and rushed to Korle Bu Teaching Hospital, where she died in her sleep.

Monkeys kill baby after they grabbed from mother in western Tanzania

Footballer and his mother granted bail over assault

A permanent cradle- woes of a mother with disabled children

I birthed him at 10 months – Mother of Volta Giant recounts