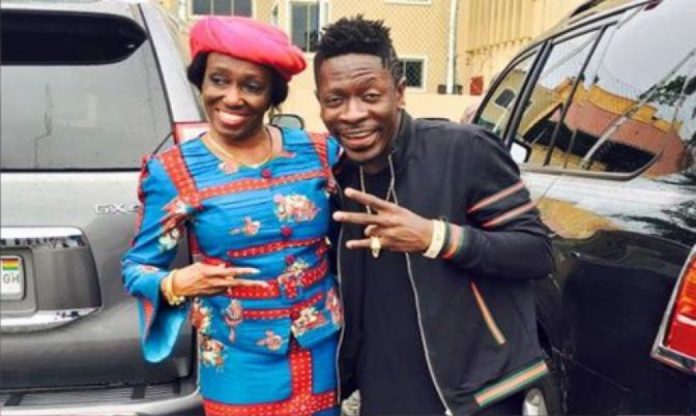 Former First Lady Nana Konadu Agyemang Rawlings has described dancehall artiste Shatta Wale’s music as one which is enchanting for the youth.
Mrs. Rawlings is known for her love for music and dancing and her sense of fashion.
The NDP flagbearer recently spoke about her love for fashion, which has been admired by many in Ghana and across the continent, and mentioned her husband, Former President Jerry John Rawlings as one of her admirers. 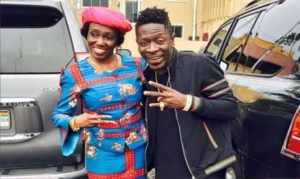 Nana Konadu worked with Shatta Wale’s father for some years and has known the “Kakai” hitmaker since he was a child.
Speaking exclusively to TV3, the founder of the National Democratic Party said she knew Shatta Wale since he was little and knew his father too.
“I knew him when he was a little boy and I knew his father too so when they were saying Shatta Wale Shatta Wale, I asked myself who he was but I later got to know who he was.
“His music is enchanting for the young people and I like to encourage artisans, artistes and generally any young person who is into business and I encourage them so I called him to come over and we took pictures.”
The former first lady heaped praise on all other Ghanaian artistes, saying she loves and appreciates their music just as she does for Shatta Wale’s.
“I love them all and even Shatta Wale with his wild music which is still very catchy and I like Becca and all the others too.
“I appreciate music, unless the music is not so good, then I will say I don’t like it but I appreciate any type of music whether it’s classical, hip hop or Bisa Kdei.”
Source: Tv3network.com
Send your news stories to newsghana101@gmail.com and via WhatsApp on +233 244244807 Follow News Ghana on Google News

Grammys: Rocky Dawuni should be the benchmark for Ghanaian artistes – Epixode

UCF-Ghana calls for unity among cadres