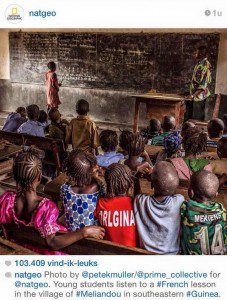 A touching story has come from West Africa, proving that the sport of soccer truly is a global game.

National Geographic photojournalist Pete Muller thought nothing of his Instagram post featuring a picture of a classroom in a remote village of the West African country of Guinea.

But Napoli forward Dries Mertens noticed, when few others even batted an eye.

The 27-year-old Belgian international saw one of the children in the corner of the frame wearing his jersey ? albeit a camo edition from a couple of years ago ? and at that moment he decided to help. Mertens shared the picture on Twitter last week, and he eventually got in contact with Muller about helping the child and ultimately the village.

Initially Mertens wanted to send his newest shirt plus some soccer balls, but after conversations with Mertens, his agent, and Muller, it has ballooned into a much larger scale project.

West African countries such as Guinea have been rocked by the Ebola outbreak. Morocco, situated a few countries north of Guinea, was scheduled to host the 2015 African Cup of Nations, but backed out after fears that the influx of fans from around Africa would pose a serious risk to the country?s health. Morocco has paid dearly for the decision to pull out of hosting the event, as the African federation banned the country from the event plus the following one as well.

While Ebola has subsided slightly, the effects linger, as Muller points out. The outbreak affected the area?s ability to harvest crops, and as a result food shortages plague the region.

Mertens? agency group posted on Friday that there were discussions about helping the school further, but no details have been shared as of yet.