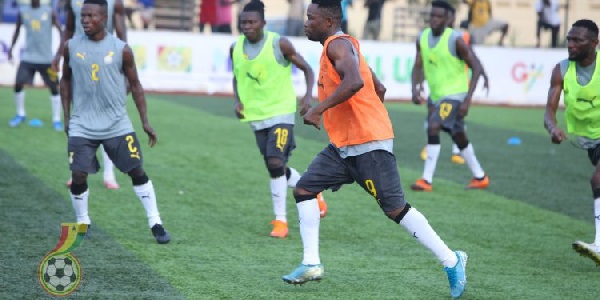 Electroland Ghana Limited producers of NASCO Electronics have supported the Black Stars of Ghana with an amount of $60,000 ahead of their 2022 World Cup qualifiers and preparations for next year’s African Cup of Nations (AFCON).

The Black Stars would quest to reach their fourth World Cup next year when they engage Ethiopia and South Africa in September as well as looking forward to breaking their 40-year AFCON trophy drought in Cameroon next year.

President Nana Addo Dankwa Akufo-Addo back in April appealed to Corporate Ghana to aid the Black Stars financially as they prepare for the aforementioned tasks as the quest to bring honours to the country.

According to Mr. Azan-Gboik, his outfit has over the years supported football as they always reward best performing players and coaches in Ghana Premier League, Women’s Premier League, among other competitions of the Ghana Football Association.

Mr. Ussif Mustapha, Minister for Youth and Sports, who received the first disbursement of the donation was grateful to Electroland Ghana for their kind gesture and urged other corporations to come on board to support their course.

The Youth and Sports Minister said that these kinds of donations from corporate organizations would relieve the burden of the government who have over the past year’s financed the Black Stars in previous tournaments.

He also pleaded with corporate Ghana to also support other sporting disciplines and not only the Black Stars especially with the recent success of Ghana’s Olympic who brought back a bronze medal in boxing ending our 29-year medal-less drought.