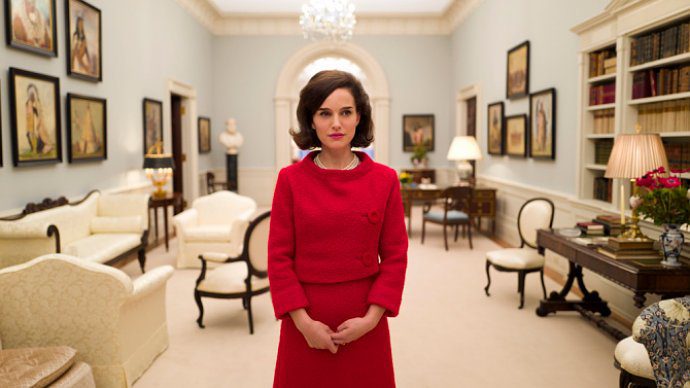 Seven months after learning that Natalie Portman would star as Jacqueline Kennedy Onassis in “Jackie”, now fans get a first look at the 34-year-old actress portraying the late first lady. Debuted via Deadline, the first photo of the movie sees Portman wearing a tweed red suit in a Victorian-style room.

In the photo, Portman is seen throwing a sharp gaze on a certain point. She also wears a pearl necklace and sports Jackie-like hairstyle to approach the look of John F. Kennedy’s wife.

“Jackie” follows the movements of Jacqueline in the aftermath of her husband’s assassination on November 22, 1963. Noah Oppenheim (“The Divergent Series: Allegiant”) penned the script, which was on the 2010 Black List.

LD Entertainment, Bliss Media and Protozoa Pictures team up to finance and produce the film, which is currently shooting in Paris, with Pablo Larrain serving behind the lens. Darren Aronofsky produces with his Protozoa partners Scott Franklin and Ari Handel, along with Juan de Dios Larrain and Mickey Liddell.

“Pablo is a masterful filmmaker, the cast is top notch, and we are thrilled to be working with him and our producing partners,” Liddell said. Peter Sarsgaard, Greta Gerwig, John Hurt, Max Casella and Beth Grant also star in the film which is expected to arrive in North America in 2016.