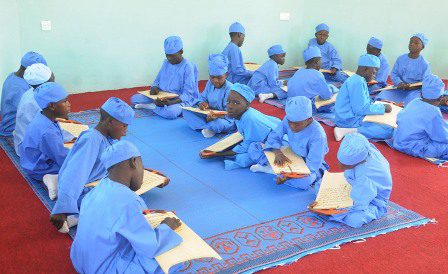 The social significance of the almajiri schools has been a subject that analysts are yet to reach to any definite characterization. In the northern part of the country, this school system is Utopia regardless the neo-definition of education by the Boko Haram sect in the north as a sin. Against this backdrop, those who are not from the north have been worried that while the almajiris wander the streets in search for support from people, they pose a threat to national security as they could be feasible to the indoctrinations of the Boko Haram terrorists group. It was perceptible that 30 per cent of Northern youths were almajiris, even though that Katsina State was among the first place in the regions that made up Nigeria where the first college in the northern Nigeria was built. President Goodluck Jonathan affirmed this when he visited Katsina State for his 2015 electioneering campaign on Tuesday, January 20 2015. The president said that the Federal Government established 38 Almajiri Quranic schools in Katsina State with 19,000 pupils? enrolment.

This is apart from accounts that Borno State is reverenced as a centre of Islamic learning, with 389,048 almajiri pupils. From records, Kaduna State has 824,233 almajiris. By October 2012, the Federal Government had said that it had completed 64 out of the 89 Almajiri schools in the northern part of the country, yet the number of almajiris in the north was not reducing. In making sure that there is an incorporated education that would encompass basic Western education alongside Islamic education as a means of plummeting the level of illiteracy in the northern region, which was seen as the causative factor of the incessant uproar in the north at any slight provocation, the Federal Government built seven Almajiri/Tsangaya schools in Niger State alone and handed them over to the state government, even though that observers later found out that the number of almajiri schools built in the state were far lower than the population of almajiris in the state.

By February 9 2014, it was revealed from a survey conducted by the Niger State government, in which it was found out that there were no smaller amount than 57, 281 almajiris in the state. Two almajiri schools that were built in Birnin Kebbi and Argungu as at the year in quote were reportedly left closed since finishing point two years ago. It was not certain why the relapse in the programme whether as it was the agreement between the FG and the states government that the former would take care for about 70%, while the state takes care of the rest 40%. What has delayed completion of the schools in some states was, according to explorations, the states concerned were not playing along with the federal government in making sure that the project was achievable. By April 2012, the Federal Government had spent N5 billion on 35 model almajiri primary schools being built across the nation, said Executive Secretary of Tertiary Education Trust Fund, TETF, Professor Mahmood Yakubu, in Sokoto.

As at May 13 2014, a statement by Mr. David Apeh, Public Relations Officer of UBEC, and made available to the News Agency of Nigeria in Abuja, said that 103 of these schools have been completed and handed over to the SUBEBs, while 22 were at various stages of completion. It was believed that the Federal Government came up with the idea of the modernised almajiri schools when it was being recurrently criticized for the insecurity in the north, with Nigerians on this criticism job also not restraining an accusing finger that the Boko Haram threat in the North was for the lack of qualitative education in the area.

With the entire attendant racket by the government, a group known as the Grassroots Development Network on January 7 2015 said that the Almajiri schools cannot provide qualitative teaching because they are underfunded. This disclosure was made by the National Coordinator of the group, Yusuf Garba in Kaduna. According to Garba, about 127 almajiri schools across the northern states lacked essential teaching and learning facilities and the nomadic basis which is the core lifestyle of the almajiris. The group was invariably talking about statistics presented by Arewa Youth Mobilisation, AYM, as at April 26 2012 that there were 1.6 million almajiris in 26,000 tsangaya schools across the 44 local government areas of Kano State.

Yet, President Jonathan had assured Nigerians at the inauguration that his administration believed that the time has come for the country to build on the moral foundations of the traditional school system by providing the almajiri with conventional knowledge and skills that would enable them to fully realise their creative and productive potential. However, some opinion leaders had divergent views, describing the almajiri practice as ancient practice in the north where indigent children were colonised by Mallams to be begging for arms in the streets for them.

Nonetheless, some schools of thought believed that such school had worked in the past, but now, ?an avenue for the mass production of miscreants, thugs and vagabonds.? El-Amin Zubairu, Coordinator, Peoples Advocacy for Human Rights, PAFHR, a Northern-based group had told newsmen: ?As far as I am concerned, the Almajiri system should give way, we no longer need it in the north. I am a good Muslim and I know how my religion admonishes us to treat the poor. A lot of indices point to the fact that almajiris are now tools in the hands of those who use them to perpetuate evil. So, whether it is Almajiri education or not, the system should be confined to history.?

Some public affairs analysts had characterized the project as a waste of Nigeria?s scarce resources. They believed that the money should’ve been expended on the fight against some diseases ravaging the northern part of the country such as cholera and blindness. These Nigerians added that they knew that even if the country preferred to invest its money in the almajiri school project, the almajiris and their sponsors would rather prefer rankadede (which translates to begging). Other Nigerians had slammed President Jonathan that he was indirectly not regarding the north as part of Nigeria by his administration?s encouragement of almajiri schools in the north. To this set of people, they frowned that promoting almajiri schools was invariably promoting Islam over other religions in the country

It is on record that the Senate had in 2008, made an attempt to end the almajiri debacle by proposing a bill for the acting-out of the National Commission for the Eradication of Child Destitution in Nigeria. Known as Almajiri Bill, it was sponsored by Umaru Argungu and 31 others. In their mindset, they required that any proprietor of an unregistered tsangaya school should be punished with two years jail term. It is perceivable that the efforts of the Federal Government in spending billions of naira to build almajiri schools across the 19 Northern states failed, as Boko Haram terrorists that have been ravaging the northern part of the country, are recruiting young suicide bombers in their fold; mostly children who are picked from the streets in the north begging for arms, suspected to be the almajiris.

Although, the children in the almajiri schools were so glad when in May 2014, the Federal Government, in association with the Universal Basic Education Commission, distributed 50 per cent of the cost essential for the acquiring of school uniforms to them. President Goodluck Jonathan under whose leadership the project was being executed had said in Sokoto city, the Seat of the legendary Sokoto Caliphate that he would have been an almajiri if he was from the north, because he owned no shoe as a kid living with his poor parents in the hinter region of Ijaw.

The aim of the National Almajiri Education initiative was to re-dress the out-of-school children syndrome at the grassroots. It was believed that the programme was to guarantee that children at the early childhood stage had access to education, which was one of the statutory functions of the commission, hence 125 almajiri model schools were being constructed by the Federal Government under the National Almajiri Education Programme.

“We have felt personally the significance of building a community with a shared future for mankind”: Vice President of Laos National Assembly

Kablevu Community In Tears Over Neglect

‘Education must be holistic to cover all dimensions of social life’

“Education continue to remain priority in my administration” – MCE

Ian Prukner: The Significance of Consistency and Staying Motivated