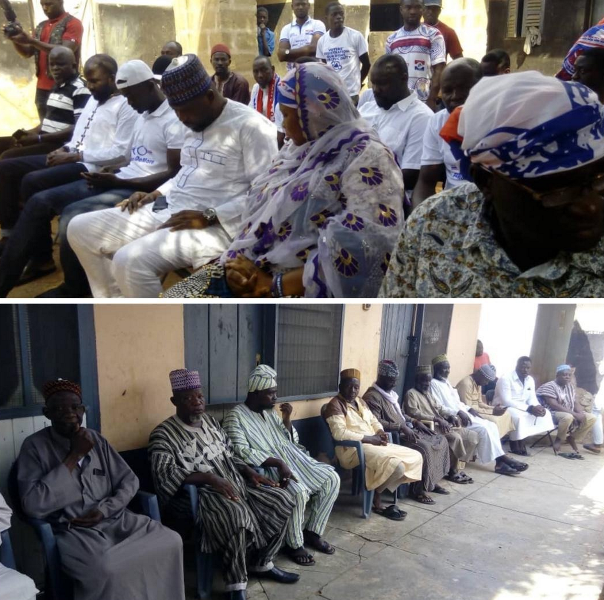 Alhaji Abdul Aziz Haruna Futa, National NASARA Coordinator, New Patriotic Party (NPP) has paid a courtesy call on the Chiefs and elders of the Zongo Community in Kpando as part of his tour of the Volta Region.

He was visiting some Zongo Communities in the Region to canvass for votes for the NPP ahead of the elections based on the recognition the Communities had gained during the Presidency of Nana Addo Dankwah Akufo-Addo and retain him to continue.

Alhaji Futa said the Zongo Community had since 1992 voted massively for the opposition National Democratic Congress (NDC) on the basis that the New Patriotic Party NPP hated the Zongo, adding that it was a total falsehood as was being proven by President Akufo-Addo.

He said the NPP was the only political party that had shown love and support to the Moslem Communities by picking running mates from the Northern part of the country for every election.

Alhaji Futa said the NDC had no plans for the Zongo Community but President Akufo-Addo promised and had delivered on his promises.

He added that to prove how the President valued the Moslem Community, he created the Ministry of Inner-City and Zongo Development and also set up the Zongo Development Fund, an initiative the NDC never thought of while in power.

Alhaji Futa said Zongo Communities were benefiting from the policies as schools and clinics were being built in those Communities.

He said the NDC was “forced” to make promises to the Zongos after the sterling performance of the NPP but they (NDC) ended up promising to build mortuaries.

The NASARA Coordinator added that policies like Free Senior High School had benefited Ghanaians a lot, especially the Zongos as the days where mothers had to sell belongings to cater for the wards in school were no more.

Alhaji Futa said about 5,000 Hajj pilgrims applied for permission to travel for pilgrimage but only 3,000 were granted at the detriment of the other 2,000.

He said it took the intervention of President Nana Addo for the other 2,000 to go on pilgrimage.

Alhaji Futa urged the people to retain the President to continue his developmental agenda for the Zongos.

Mr Mudashiru Adebayor, Volta Regional NASARA Coordinator, called on people in the Zongo Community to reject Former President Mahama as he had nothing more to offer Ghanaians.

He said the NDC argued that FSHS initiative could only be realized in the next 20 years but had become a reality under Nana Akufo Addo’s presidency.

Mr Adebayor said it was the President’s wish that all children of school-going age received an education.

Alhaji Mustapha Abdul Aziz, Municipal Chief Imam, Kpando said he was a witness to the developmental projects being undertaken by the Akufo- Addo led administration in the Zongo Communities.

He called on the government to increase security within the various communities ahead of the December polls.

Alhaji Aziz pleaded to the government for the payment of Islamic teachers in the Kpando Municipality.

The Poor and Vulnerable are exempted from payment of 1.75 percent E-levy – Razak Opoku