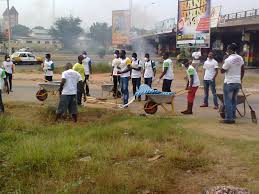 Over one thousand national service persons drawn mainly from the Greater Accra Region joined in the second National Sanitation Day cleanup exercise which lasted for about four hours at various places in Accra.

Addressing the media during the exercise, Dr. Kpessa-Whyte underscored the importance of the role of the national service personnel in the national sanitation day programme. He said this is the first time that the Scheme is involved in the exercise since it was launched, and gave the assurance that national service personnel would continue to participate in subsequent exercises to sustain the campaign against filth in our communities.

Dr. Kpessa-Whyte urged all Ghanaians, especially the youth, to see the National Sanitation Day Programme as important since a clean environment ensures healthy citizenry and less spending on medical bills on family budgets. ?We all as Ghanaians must see this exercise as one that would help keep our environment clean and prevent the frequent outbreak of cholera and other avoidable diseases.

He expressed his appreciation to the national service personnel who turned out for the exercise, and also expressed his gratitude to the Ministry of Local Government and Rural Development and all the sponsors of the programme.

The exercise around the Kanda cluster of schools attracted some individuals and residents around the area who joined and enthusiastically carried out the clean up.