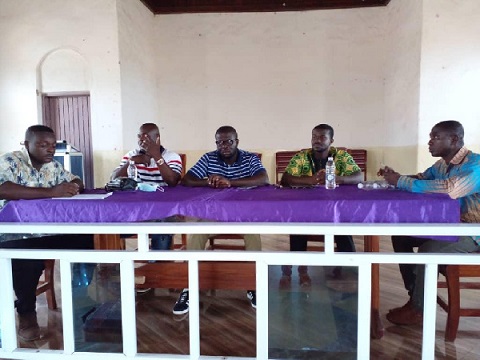 Members of a pressure group, ‘Coalition of Concerned Natives of Sefwi Land’ in the Bibiani-Anhwiaso-Bekwai Municipality of the Western North Region, have picketed at the office of Kinross Chirano Gold Mines Limited over neglect and denial of employment.

The Coalition, made up of concerned youth and opinion leaders from the three traditional areas of the mining zone namely; Chirano, Anhwiaso and Wiawso are therefore demanding that employment quotas were given to indigenes of the catchment communities.

According to them, natives in the area had been long over exploited economically at the detriment of their well-being, a situation they said they could no longer condone.

The group demanded the split of the Community Relations Department of the company from the Human Resource office, headed by an indigene to properly communicate, propel and respect the culture and way of life of the people.

They also gave the mining company a 20-day ultimatum to undertake broad stakeholder consultation including the leadership of the youth group to address their grievances.

“Failure to cooperate with us through dialogue will leave us with no other option than our next line of action, which may have dire consequences on the operations of mining on our lands”, the group warned.

Speaking at a news briefing, the leader of the group, Mr. Kwabena Obeng lamented that the abundant natural resources in the area had not translated into the improvement in the living standards of the people as they were neglected and denied employment opportunities.

“How can we live on our land and become beggars to exploiters of our resources and moreover get denied of the little gains we as the local indigenes could rely on to make a living and at least commensurate with the loss of our property.

“What is worrying is the fact that better employment opportunities like the Human Resource position or its deputy is not advertised for equally qualified and competent people from sefwi to apply, but is only handpicked by the company”, he stated.

According to him, indigenes of the catchment communities had the requisite resources and capacity to execute major contracts that were awarded to non-indigenous companies who only enriched themselves to the detriment of the welfare of the local people.

“We have only one land as bequeathed to us by nature and our ancestors and will do everything possible to safeguard it from exploiters and domineering forces’, he added.

Mr Obeng alleged that contrary to the operations of other mining Companies, at Obuasi, Asanco Mines and Tarkwa, where major contracts were offered to the indigenous people, Kinross Chirano Gold mines was awarding juicy contracts to non-indigenous people.

He added that the mining company had turned a blind eye on the residual environmental impact on the lives of residents in the Catchment communities.

“As a mining company that is of international repute, best practices should be your hallmark in safeguarding our environment and making it wholesome for living after your mining operations”, he said.

The actions of the company, Mr Obeng said had convinced the people that their intentions were only to extract the rich reserves, acquire wealth and leave the local indigenes impoverished.