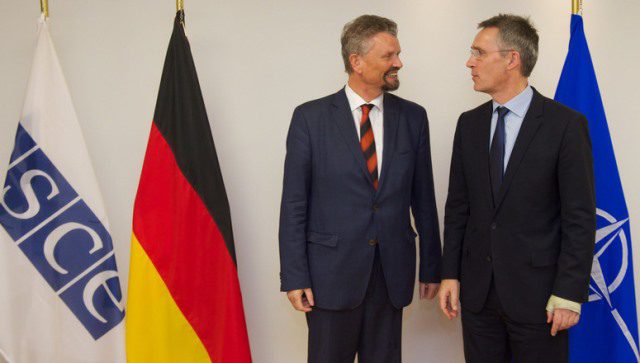 Germany took over OSCE chairmanship in 2016. “I appreciate the efforts of Germany’s OSCE Chairmanship to focus on renewing dialogue and strengthening the OSCE’s instruments and discussion forums,” Stoltenberg said, describing the OSCE as a “key player in many areas of particular interest to the Alliance.” Stoltenberg stressed the need for stronger measures to create more transparency on military activities in Europe in the wake of Ukraine crisis. He welcomed the efforts within the OSCE to further strengthen mechanisms for transparency in order to avoid accidents and incidents. The organization has 57 participating States from Europe, Central Asia and North America, including Russia.

They also discussed opportunities to increase information sharing between the two organizations, according to NATO press release.

The NATO chief thanked the OSCE for its crucial role in monitoring the situation on the ground in Eastern Ukraine, and in the efforts to facilitate a diplomatic solution, stressing that the full implementation of the Minsk agreements offers the best chance for peace in Ukraine.

Special Representative Erler and OSCE Secretary General Ambassador Lamberto Zannier separately addressed the Ambassadors of the North Atlantic Council about OSCE activities and the priorities of the German chairmanship.