The Unstereotype Alliance, an industry-led initiative convened by UN Women to end harmful stereotypes perpetuated through advertising believes that stereotypes are everywhere, we can’t escape them.

It is worth noting that the potential damage caused by gender stereotyping does not only emanate from the advertising industry but by media as a whole and society at large.

It is heartwarming other organisations are beginning to join the conversation about progressive portrayal of women in media, advertising and entertainment industry.

Guinness Ghana Breweries PLC (GGBPLC) deserves commendation for charting this course and bringing the issue to the front-burner in a bid to lead an industry-wide approach.

Guinness Ghana’s Progressive Portrayal initiative seeks to work with its partners to be a driving force in its effort to accelerate and transform the advertising industry to be more representative, progressive and equal.

The initiative focuses on the importance of diversity in the advertising industry and partnerships to support more progressive gender portrayal in content.

On Friday, April 9, 2021, Guinness Ghana held the first of such conversations where it assembled an expert panel to discuss women’s representation in the media, advertising, and entertainment industry in a bid to drive advocacy on the progressive portrayal of women.

The panel took time to narrate their experience where they have had to battle issues of gender stereotyping while they also spend time to proffer solutions, they believe would go a long way to dismantling such prevailing narratives.

According to Lydia Forson, for instance, women need to be empowered. She believes that when that happens women will be in a position to determine roles they want to play rather than they having to accept any role because they have no choice.

“A lot of ladies in our industry feel that the only way they can make it to the top is by taking off their clothes…What we are fighting for is for women to make that choice because they want to and not because they have to,” she argues.

Russel Eni, MD and Creative Director of Insel Communications in his submission adds that there is the need for men who are oft guilty of propagating such bias to make a deliberate approach to unlearn some of the bias they have cultivated over the years.

He believes that in fighting such stereotyping, men have a huge task to contribute to changing the dominant narrative that places women as second-best to women.

Akua Owusu-Nartey who is the Regional MD Ogilvy Africa also places enormous responsibility on content creators adding that when they begin to look at things through different lenses and that would make a world of difference.

“Because we lead clients whether we like it or not. What we take to the clients is the starting point of where the work goes.

We need to find the right boundaries for young girls such that in raising them we allow them to be expressive, speak their minds and be confident and at the same time within certain boundaries,” she said.

Responding to a question on why Guinness was pursuing this initiative, Suzanne Butah, Legal Director of Guinness Ghana, touted the company’s inclusive and diversity agenda. 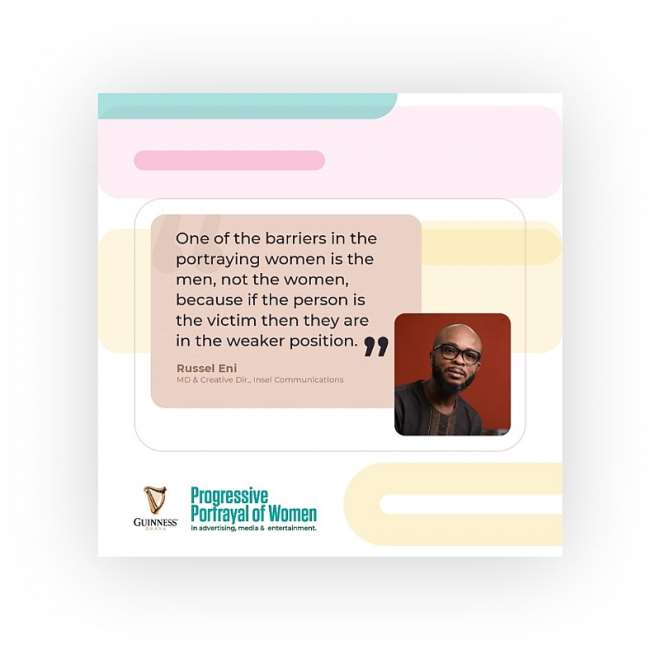 Women Run Africa And Nobody Can Fly Without Them – AfDB Boss