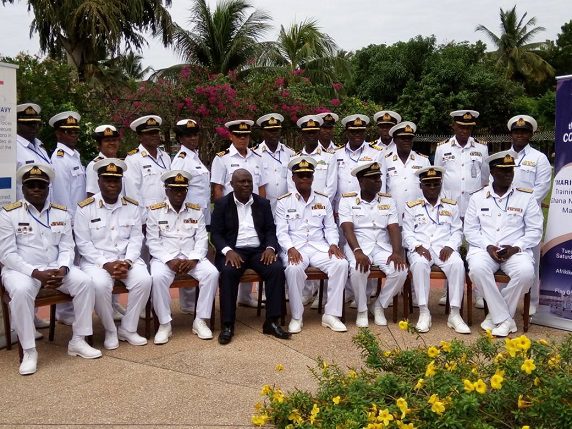 A new training regime for law enforcement personnel, which regularly arms them with new and modern appropriate equipment, as well as providing adequate logistics support and well resourced front line personnel, has been proposed as a longer lasting antidote to Ghana’s vulnerable maritime domain.

This view, among others, was expressed by the Chief of Naval Staff (CNS), Rear Admiral (R/Adm) Peter Kofi Faidoo, at the 4-day 2018 CNS Bi-Annual Conference, which took off on the 9th of May, 2018, at Akosombo, in the Eastern Region.

R/Adm Faidoo revealed that personnel are being trained to meet the demands of new challenges, as government has also set in motion the process for the acquisition of ships and logistics for the Navy, for maritime safety.

The CNS also called for a coordinated approach to information gathering and sharing among the various agencies involved in maritime law enforcement.

“The gravity and dynamics of recent maritime threats must energize us to rethink and refashion our methods of fighting crime, for it is increasingly clear that the old strategies are no longer adequate for dealing with contemporary security challenges”, Admiral Faidoo said.

The opening ceremony of the conference, which is themed “Maritime terrorism: training and equipping the Ghana Navy against evolving maritime threats”, brought together the District Chief Executive of Asuogyaman, key personnel from the Navy, Air Force, Ghana Maritime Authority, Ghana Ports and Harbours Authority and district heads of all security agencies of the district.

In a welcome address as host of the Naval conference, the Flag Officer Commanding (FOC), Eastern Naval Command (ENC), Commodore James Osei Kontoh, posited that the enormous resource in Ghana’s Maritime domain and, the nation’s heavy reliance on sea route for commercial activities for her imports and exports, has positioned the marital domain as a vital means of livelihood for the country’s economic prosperity.

Ghana’s maritime domain, which is part of the Gulf of Guinea, is considered by the International Maritime Organization (IMO), as one of the highest risk areas for shipping, and is inundated with many acts of maritime crimes, such as kidnapping, sea robberies, illegal bunkering, unregulated fishing, drug and human trafficking.

“The Navy firmly believes that collaboration with key stakeholders in ways of optimizing the use of capital resources such as ships and other new and modern equipment, would go a long way to reduce Ghana’s vulnerability to maritime criminal attacks and further improve maritime security and safety”, Commodore Kontoh remarked.

He also urged inter-agencies integration of goals and priorities for common goals in the maritime domain.

A system of consultation for ideas had always existed at the echelons of the Navy, however, to further deepen and enhance that means, the CNS Bi-Annual Conference was was instituted in 2014, by the previous CNS, R/Adm Geoffrey Mawuli Biekro (rtd), to deal with topical challenges that requires the Navy’s input.