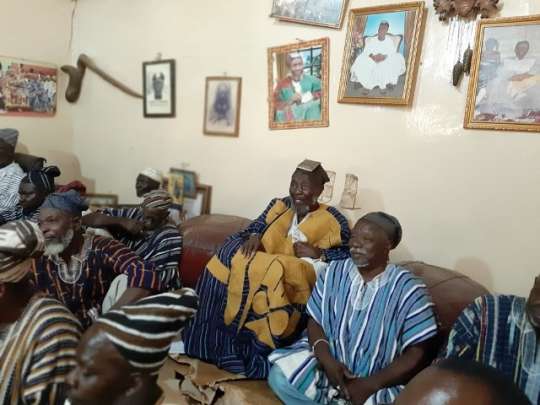 The Paramount Chief of the Mamprugu Traditional Area, Nayiri Naa Bohugu Mahami Abdulai Sheriga, has appealed to Mr Ambrose Dery, the Minister of the Interior to post more Police Personnel to the Region to fight the increasing rate of armed robbery.

He said as a new Region, there was the need to increase the number of Police Personnel for residents to go about their daily activities peacefully.

“There is also the need for empowerment, if you bring them with only sticks, that will not help,” the Nayiri said through an interpreter when the Minister paid a courtesy call on him at his palace on Monday.

The Nayiri said the Personnel should be empowered with the needed equipment to fight crime because their presence without the necessary vehicles and weapons among others would defeat their purpose in the Region.

Mr Dery, who was accompanied by Mr Solomon Namliit Boar, the North East Regional Minister and some top Officials from his Ministry and Senior Security Officers, was in the Region for a day’s working visit.

The visit, which was part of his tour of the newly created Regions, was to afford the Minister the opportunity to interact with Officers under his Ministry and to get first-hand information about their challenges in the area.

The Chief’s call came on the backdrop of two reported armed robbery cases in the Region since the year began, “I am appealing to you to make sure that we have adequate Police personnel to enjoy our peace,” the Nayiri said.

Mr Dery commended the Nayiri for the role he and other Chiefs played to bring peace to Dagbon and appealed for his support to the Regional Minister to ensure peace in the Region.

“We need to send more Police men here, and that is why we should appreciate the increased recruitments to the Security agencies. We need more vehicles here to enhance the patrolling capacity.”

He said the Nayiri’s appeal was an indication that “He appreciates the needs of his people and the least we can do is to work to make sure that we meet his request, it is a matter of concern that we will work on.”

He said more Police Stations would be established and explained that “when the Police stations are close to each other it is easy for us to continue to patrol more effectively.”