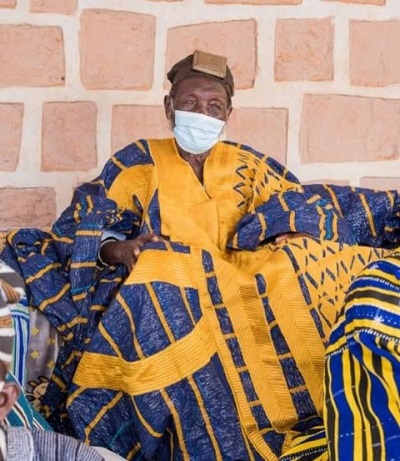 The Nayiri, Paramount Chief of the Mamprugu Traditional Area in the North East Region, Naa Bohagu Mahami Abdulai Sheriga, has appealed to the government to establish a Senior High School (SHS) in the Yunyoo-Nasuan District of the Region.

The Nayiri, who is the President of the Mamprugu Traditional Council, through his spokesperson, said the District did not have SHS, which affected the quality of education in the area.

“Fortunately, a structure has been identified which could be used to kick start the process, hence, we will be most grateful if you could intervene in this direction,” the Nayiri said.

He added that the District was yet to benefit from the government’s ‘Agenda 111’ which is intended to provide hospitals to every District that had none.

The Paramount Chief made the appeal when President Nana Addo Dankwa Akufo-Addo recently paid a courtesy call on him on the first day of his two-day tour of the Region.

He said apart from the absence of SHS for the area, which was most critical, the Yunyoo-Nasuan District was also faced with poor telecommunications connectivity coupled with an untarred road network.

The Nayiri said he was aware of efforts being made by the government to fix some of the challenges, and reiterated that “The most critical one is the absence of a Senior High School.”

He said a number of the Ghana Education Trust fund (GETfund) projects at the Nalerigu Midwifery and Nursing Training College had stalled for the past two years, which compelled management of the College to limit the required number of admissions to the College.

The Chief also appealed to President Akufo-Addo to consider the establishment of a satellite campus of the University for Development Studies at Nalerigu to build a human resource for the Region.

He expressed gratitude to the President for the “support game-changer projects” in the Region, and mentioned the Pwalugu Multi-Purpose Dam Project, which would provide hydroelectricity power supply, 25,000 hectares of irrigation facility and also solve the perennial flooding in the area.

President Akufo-Addo said he was informed by the Member of Parliament for the Area that there was an E-block that was almost completed at Yunyoo to solve the issues of SHS in the District.

He said steps would also be taken to address the stalled projects at the Nursing and Midwifery Training College, and noted that “These are all very important additions to our infrastructure in the country.

“The Ministry of Education and I will also examine the request you have made on the satellite campus of the University for Development Studies to be established here in Nalerigu. It is a worthwhile idea and we will work on it,” he said.

The President as part of his recent tour, inspected the ongoing construction works of the Regional Coordinating Council (RCC) block, the Walewale Watermelon Processing Factory, and a Rice Processing Factory at Nasia, all under the ‘One District, One Factory initiative.

Professor Amfo act as Vice Chancellor of University of Ghana

Government urged to invest in promoting reading in communities