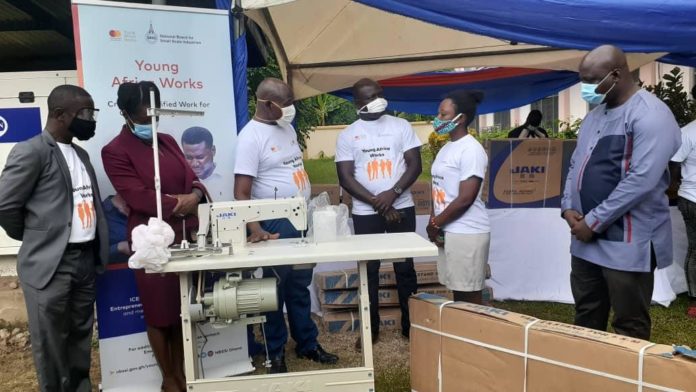 The National Board for Small Scale Industries (NBSSI) and the Mastercard Foundation Young Africa Works project has been launched in Koforidua to support over 4,177 young entrepreneurs in the region.

The project has three components- Apprenticeship to Entrepreneurship, which aims to equip young men and women to earn a sustainable income, and the Business Acceleration to fast track growth and productivity of small scale enterprises.

Mrs Kosi Yankey-Ayeh, the Executive Director of NBSSI, said the three-year project would create about 39,000 jobs for the youth in the informal sector.

She said about 70 per cent of the support under the project would go to build the entrepreneurial capacity of women.

He said as part of the project graduate apprentices who had completed skills training but not able to start a business would be supplied with start-up kits to start their businesses and can employ others.

Mr Emmanuel Kissi, the Eastern Regional Secretary of the Ghana Tailors and Dressmakers Association, said about 3,000 trade apprentices graduated every year but had no support to start a business on their own.

He said the project was a good intervention to help the many young men and women to create jobs and have a sustainable source of livelihood.